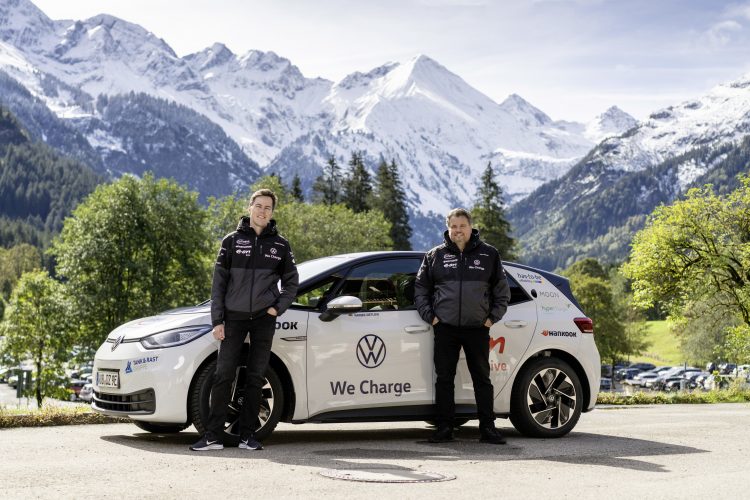 Rainer Zietlow (right) and Dominic Brüner at the start of the marathon tour near Oberstdorf.

The new Volkswagen ID.3 is having to face its hardest challenge yet as it will be tested over the course of a 20,000-mile journey through Germany.

The long-distant record-breaking driver from Mannheim, Rainer Zietlow, and his co-driver Dominic Brüner are now carrying out the ultimate road test. Over the course of a unique two-month marathon, they will be stopping at around 650 quick-charging stations with more than 60 kW charging capacity.

They are driving a pre-production model of the ID.3 Pro S with a 77kWh net battery energy capacity. The battery offers a range of up to 549 km in a WLTP cycle and will be brought to market in spring 2021.

The team has started on 28 September at 2 p.m. from Germany’s southernmost hotel near Oberstdorf and is finishing at Germany’s northernmost car park, west of List on Sylt.

Rainer Zietlow is known as a long-distance specialist. His worldwide record-breaking projects with Volkswagen models include three World Records and seven long-distance records that have taken him to 130 different countries.

As we reported, the ID.3 is a very special model for VW as it is the first ever all-electric vehicle model produced by the German company and because it is built on the MEB platform, which will be used for many other electric models.

Also, this is not the first challenge that the ID.3 has had to go through as few weeks ago the electric model set its first range record of 531 kilometres. The EV went from the Zwickau plant in Germany, which is the production home of the ID.3, to the city of Schaffhausen in Switzerland on a single charge.