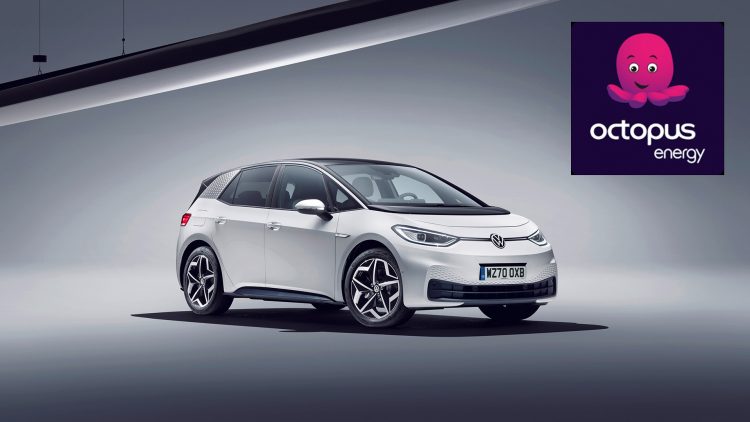 Octopus Energy has just announced a key partnership with Volkswagen, in order to speed up the transition from internal combustion engines to electric vehicles. In order to incentivise new buyers, the German automaker will offer to customers that purchase an EV a credit of up to £90 to their Octopus energy account. This sweet move is happening at a key moment for Volkswagen as it has just recently announced that the highly awaited ID.3 is finally landing in the UK.

It might not seem a robust amount of credit, however for the ID.3 that corresponds to over 8,000 clean miles. The offer will also be available to existing Octopus Energy customers who purchase an EV from one of the participating Volkswagen brands, which include Audi, Seat, Škoda, and Cupra, which we have reported are all coming out with new and intriguing electric models.

Octopus Energy has been leading the UK’s transition to electric vehicles for more than two years. Launched in June 2018, its revolutionary Octopus Go tariff was the UK’s first ‘time of use’ tariff designed specifically for EV owners, offering four hours of cheap green electricity at 5p/kWh every night.

Octopus Energy knows that having a partner such as Volkswagen will be instrumental to accelerating the all-electric revolution, according to Greg Jackson, CEO and founder of Octopus Energy.

“It’s super exciting to see the world’s largest car manufacturer fully commit to electric vehicles,” he said. “Our partnership with Volkswagen is an important step towards transitioning to a renewable energy future globally, and we can’t wait to get started.”

Volkswagen is not waiting around anymore, and it looks like it is gearing up to become a dominant force in the electric vehicle market. It also just announced the ID.4 and basically every single one of the brands in the VW group will soon come out with new electric models.

Is Hydrogen the future? Fuel cells and more in Episode 12 of the WhichEV Podcast