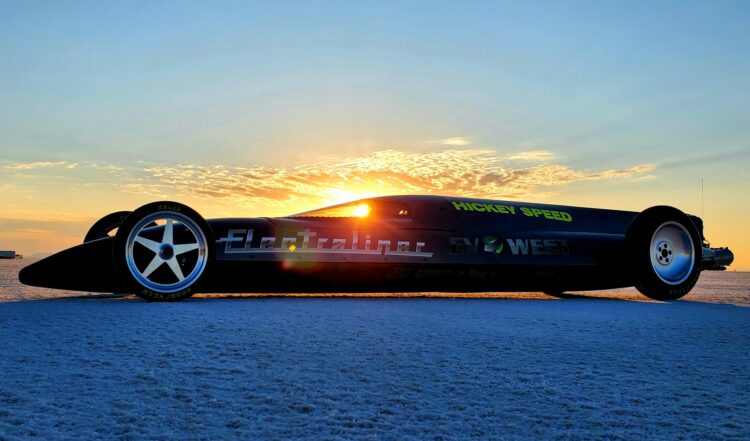 A speed record at Bonneville, in the electric vehicle category, that has lasted for 23 years has just been crushed by a car built in a mere 90 days. Bonneville is one of the most famous locations in the world for vehicles reaching incredible speeds and achieve records that seem humanly impossible. Cars usually fly through the salts flats in Utah and that is exactly what the Hickey Speed team did with its car, called the Electraliner.

The jaw-dropping speed that this missile on wheels reached was 229.363 mph, beating the previous record in the E2 category, set in 1997, by over 16 mph. According to the team, which is based in Huntington Beach, California, the design of the car took only three months. It was mostly a matter of figuring out the aerodynamics of the vehicle.

The Hickey Speed team behind the car, which also included electric vehicle specialists EV West, used the engine from a Tesla Model S, but modified with a taller gearing in order to get more torque, horsepower and rpms.

The E2 class is specifically designed for electric vehicles that have a weight between 1,051 lbs and 2,200 lbs. The Electraliner came in at 2,060lbs. According to owner Roger Hickey it was quite the challenge to achieve this result.

“The drive was crazy until we started dialling in the caster, toe in and toe out, power delivery, tire pressures, and cockpit ergonomics. But after three runs, it was pretty much turnkey,” he said. “It had a lot less power than we originally thought due to the controller overheating, but we still got the record and the aerodynamics kept it super straight, even with a cross wind.”

Hickey Speed, although satisfied with the new record, is already looking at the next challenge, which is also to dominate the E3 electric category. The record in that division is of 314.958 mph and Hickey has already set his mind on that target.

“I would like to exceed 400,” he said. “I think Hickey Speed and EV West will be competing against each other. I am partnering up with a giant team and they want to build their own designed streamliner, so for now may the better design win.”

The plan for the new record in the E2 category was instigated when the team was contacted by a Discovery Channel show called Past Forward, according to Hickey.

“[The goal] was to take an older guy like me that has been in the fuel motor business for my whole life and bring me to electric power. I was to design, build, and drive the car for the show.”

In order to build this fantastic racehorse in only 90 days, Hickey Speed spent about 400 hours just concentrating on designing it before a single tool was used. They went through seven designs to fit within the TV show’s parameters.