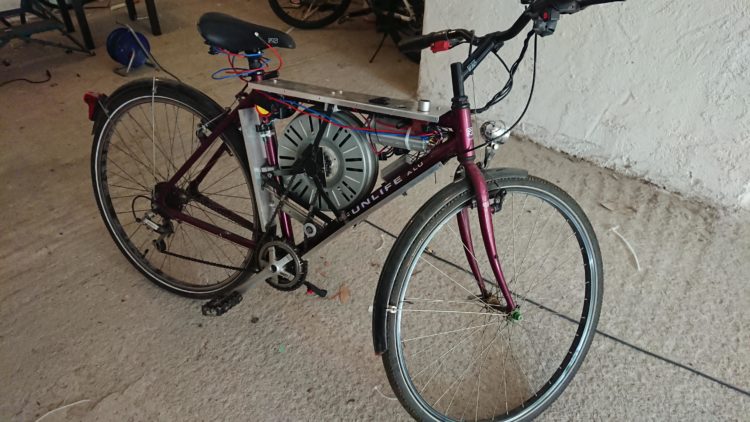 If you are looking for a fun weekend project, we’ve got the right thing for you. You just need a bike and the motor from an old washing machine. One future electrician, going by the name Jimmiecraftguy on reddit and RPK R5 on YouTube, built himself an electric bicycle out of a 20-year bike and parts from a washing machine. He was able to get this crazy thing to do 68 mph (110 kph).

The man, perhaps fancying himself as ‘Doc’ from Back to the Future, decided to build this E-bike out of nowhere as he had a brushless DC motor laying around from an LG washing machine and didn’t want it to go to waste. He used the motor to drive power to the rear wheel and included a freewheel, so it operates without pedaling. All electronics and mounts are custom made.

The motor originally ran on 200 volts but because he doesn’t “want a top speed of 150km/h [93 mph]” and doesn’t “want to die anytime soon,” it now runs on 48 or 50 volts. That said, he did take the bike up to 110 kph (68 mph) to see if he could. Not surprisingly the incredible speed damaged his rims from braking and cooked his lead acid battery. He pointed out that now that he knows he can, he won’t be doing it again and maybe that is for the best as looking at the picture and video it does not seem like the safest tool.

The electrician says he still has work to do on batteries before he can even consider being close to finishing the project. He will also change the brakes. Once his post on reddit went viral, he posted a video with more details on the build. The video shows that he was already working on his bike at the end of last year, and that he could easily do 65 kph (40 mph) on it.

Jimmiecraftguy, or Bob the Builder, however you wish to call him, seems to have created a very unique two-wheeler and we can’t wait to see the finished product.

Does Nissan’s switch to CCS charging for the Ariya mean CHAdeMO is dead?

Does Nissan's switch to CCS charging for the Ariya mean CHAdeMO is dead?