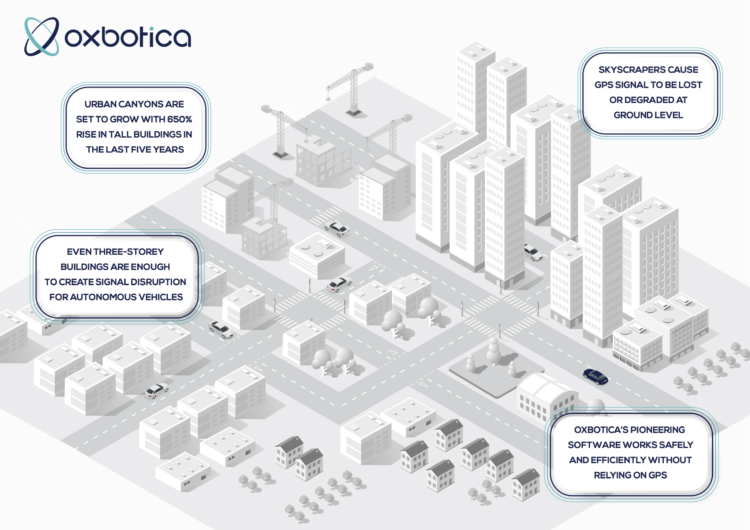 You have probably driven through a crowded city, guided by GPS, and suddenly noticed a drop in signal. The increase in skyscrapers and high-rise buildings has caused a phenomenon called “urban canyons” that disrupts GPS signals. This isn’t only an inconvenience for navigation system users, but it may affect the safety of many autonomous vehicles that rely on GPS for piloting.

Oxbotica, an Oxford University spin-off with the mission to develop autonomous driving software, is addressing this issue with its autonomous vehicle software. According to The Council on Tall Buildings and Urban Habitat, the number of tall buildings (above 200m) has risen by 650% in the last five years, and the amount is set to increase again by up to 20% in 2020.

Typically, autonomous vehicles depend on satellite signals to guide themselves to turn at the right intersection or simply reach the destination. According to Oxbotica even a standard three-storey building is enough to create signal disruption that could make it difficult for self-driving cars to function properly.

Furthermore, sunspots and solar winds have been known to interrupt GPS satellites. Oxbotica suggests that a mix of radars, cameras and lasers to navigate and localise rather than relying solely on GPS is the solution. Oxbotica is also developing its universal autonomous software by using deep-fake images to teach its AI additional driving scenarios to increase its safety.

Oxbotica claims it’s designing its software to be able to work independently of external infrastructures, which helps it localise without GPS. Using radar, laser and vision sensing, Oxbotica says it can operate in a vast range of settings from “urban canyons” to mining quarries where satellite signals may find it impossible to reach.

Ben Upcroft, VP of Technology at Oxbotica, said: “There are so many urban canyons and GPS ‘blind spots’ across our towns, cities and countryside, that we can't rely on GPS for accurate navigation. While this may pose a problem for some autonomous vehicles, our software is designed to mitigate this and is able to work independently of a GPS signal.”

What makes Oxbotica’s software so interesting is not only the innovative steps they keep taking to improve their software, but its universal capability. Hopefully soon we can see the autonomy software work in the real world and find out if it can take on the challenges of the UK roads.