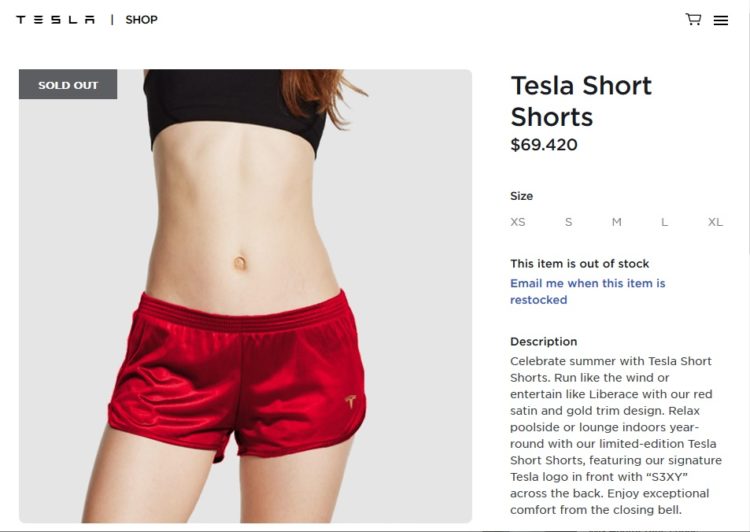 There are few certainties in this life but one of them is that anything that Elon Musk touches, turns to gold, like the mythological King Midas. Apparently, his latest business venture is ‘short shorts’, which were launched on Tesla’s website. After Musk tweeted about it to his 36 million followers, the post had over 30 thousand interactions in less than 30 minutes. The website crashed due to the high number of requests in such a small window of time, and the shorts are now sold out.

This news, which certainly give us a smile, comes after Tesla has become the most valuable automaker in the world overtaking Toyota for the second time in just a few weeks. Indeed, the shorts appeared to be intended to poke fun at stock market traders ‘shorting’ Tesla stock (betting on the price of stock going down) and presumably wishing they hadn’t. Their regrets would be evident because shares in the electric carmaker touched $1,134 on Wednesday morning before falling back, leaving Tesla with a market value of $209.47bn (£165bn). That is roughly $4bn more than Toyota's current stock market value.

After years of losses, the Californian firm has finally delivered three profitable quarters in a row as it ended 2019 with sales of just $24.6bn, having delivered 367,200 vehicles last year. Musk has vowed that Tesla will deliver at least 500,000 vehicles in 2020, a forecast the company has not changed despite the coronavirus pandemic.

There are multiple factors that propelled Tesla to become the most valuable automaker. One of them is the recent news that the company might be on the verge of producing a million-mile EV battery. Also, the fact that with recent updates the new Model S can compete with petrol engines thanks to its 400-mile range, has helped the company in achieving this great result.

Tesla has been an outlier in the automotive industry since its very first model the Roadster, which showed the world that EVs can be fun to drive. Since then it has been an unstoppable climb to the top.

Tesla has been dominating the EV market for the past years thanks to its powerful batteries and slick designs. More exciting models are on the way with the bulky Cybertruck and the blisteringly fast new Roadster.  It seems that nothing can stop Musk and his companies from conquering the future.