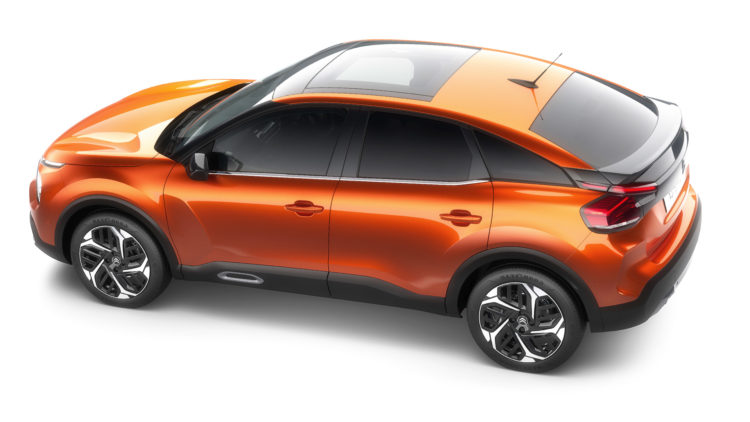 Citroen has revealed its new C4 in a pandemic-friendly online event attended by over 2,500 journalists from around the world. The C4 range will include the all-electric E-C4 but, surprisingly, no hybrid or PHEV variants. We’ve already seen some images of the E-C4, which we reckon are very promising. At the event today, Citroen gave further details, including battery size, motor power and range but, crucially, not the price.

The E-C4 will include a 50kWh battery and 100kW / 134bhp electric motor with 260Nm of torque. This will give it a reasonable 217 miles of range (WLTP) and Citroen Product and Strategy Director Laurence Hansen claimed 62 miles of range could be added in 10 minutes with a 100kW rapid charger. There was no word on performance during the briefing, but 100kW is a similar engine power to the Hyundai Kona Electric 39kWh, which takes just under 10 seconds to hit 62mph. Subsequently, we've had confirmation that 0-62mph will take 9.7 seconds and the top speed will be 93mph.

Citroen has given plenty of thought to the interior comfort. There’s an openable panoramic glass roof, and the front dash includes a wide 10in LCD panel with a flag-like design, showing the quirky flair that is typical of the company. There’s also a built-in system for installing your own tablet on the dashboard securely, so it should be safe even in the event of a crash. This is a pretty unique feature, presumably for when you want to add your own in-car entertainment.

Ride comfort is another focus, with suspension that includes progressive hydraulic cushions like that found in the C4 Cactus and C5 Aircross. The E-C4 also gets a new alloy wheel design intended to reduce road noise – an important factor when EVs are so quiet. There’s some autonomous driving ability built in with 20 ADAS features, including Level 2 highway driver assistance.

We have always enjoyed how willing Citroen is to go beyond expectations (one of its trio of guiding concepts is “audacity”) and are big fans of the Ami city transport EV. With the E-C4, Citroen is making a clear play for the more affordable end of the BEV market without hedging its bets on hybrid or PHEV options. When asked about just offering the pure electric E-C4 alongside the petrol and diesel C4 variants, Citroen Executive Vice President Vincent Cobee explained by saying “because we can and because we should”.

The E-C4 will be available to order by the end of the summer, ready for delivery before the end of 2020. But one thing Citroen didn’t divulge was how much it would cost. In our previous article, we hoped it would be £28,000 or below. Hansen only said that the cost would be “mainstream”. If that’s mainstream for a car in this class, including ICE models, we would be happy, but mainstream for a BEV would make the E-C4’s success in the market a little less certain.

See below for all the images we have.