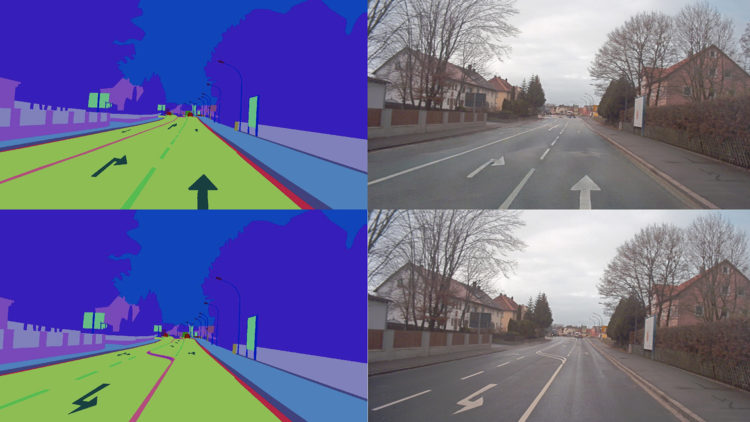 Deepfaking has made headlines in the past for producing realistic videos of politicians saying fictitious things. Similar AI-powered software is used in popular video-driven social media platforms like Tik-Tok and Snapchat, where users can make themselves look like celebrities or even change gender.

Now the technology is being used to make a safer self-driving software for vehicles possible. The technology uses pictures from car cameras taken on real-life drives and deepfakes them to morph the scenes into poor weather or other adverse conditions, in order to subject its vehicles to rare occurrences. It can even reverse road signage, change lighting or season, all while ensuring shadows and reflections appear exactly as they should.

In practice, the images that the AI develops expose the autonomous vehicle to near infinite true-to-life variations, all without real-world testing. Other self-driving software has had issues testing in adverse weather conditions, while Oxbotica’s software should be able to experiment without waiting for a rainy day.

Oxbotica was founded in 2014 as an Oxford University spin-off and intends to use deepfake AIs to teach other AIs to offer remarkable scaling opportunities. Paul Newman, Co-Founder and CTO at Oxbotica, said: “There is no substitute for real-world testing, but the autonomous vehicle industry has become concerned with the number of miles travelled as a synonym for safety. And yet, you cannot guarantee the vehicle will confront every eventuality, you’re relying on chance encounter.”

The autonomous software is designed to be universal and to be safely deployed on any vehicle. The company also hopes to make mining quarry, goods transport and trucks more autonomous, a use that companies like Hyundai have also been working on.

Whether you are for or against self-driving cars, at this speed of development having autonomous vehicles on our roads seems inevitable. Oxbotica has developed a software that will potentially make autonomous driving safer, and avoid countless hours of road testing.

Can Tesla really deliver $35 billion worth of Cybertrucks?