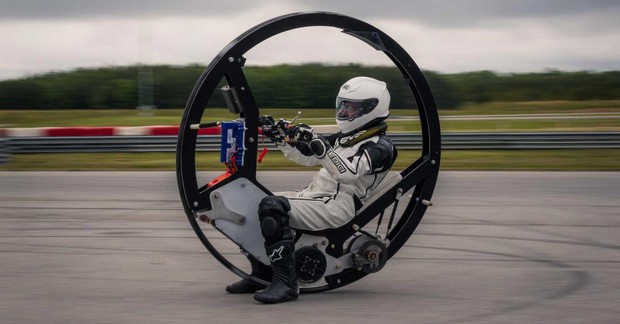 An all-electric unicycle that goes over 100 km/h. No, it’s not the same unicycle that Will Smith used in Men in Black 3, but a project made by a team from Duke University. This special electric vehicle is called the EV360 electric unicycle. It is expected to break a new speed record in its class by travelling at over 70 mph – the equivalent of around 113 km/h, which is very fast and very scary for something with just one wheel.

However, the EV has no driver steering ability, so all the jumps and quick turns that the Men in Black do are out of the question. Fortunately, Duke University’s goal was different, as the team is specifically trying to build the fastest single-wheeled in the world. It has been designed to hit a speed of 112.654 kph, and thereby breaking the current Guinness World Record for similar vehicles of 98.454 kph.

The head engineer and test driver Anuj Thakkar explained that the EV360 is impossible to steer until the monocycle hits 24 kph.  The rider has to stabilise the circus-like vehicle with their feet. Once it gets going, the driver must try and hold it steady, keep accelerating, and hope for the best.

Not surprisingly Thakkar says he has had about 15 crashes in the vehicle so far, luckily none of them serious. “The first thirty seconds of each run are the scariest. It’s when you’re trying to keep the vehicle upright while still accelerating. But once you stabilise at around 15 miles per hour, it’s smooth sailing,” Thakkar said. “At that point, you kind of just have to hold tight, trust the vehicle, and enjoy the ride.”

Unfortunately, this one-wheel electric vehicle is not a commercial vehicle that you can buy as an alternative to a electric bike, because it is only a special project performed by students at Duke University in North Carolina, USA. This, of course, means that the mono-wheel has no real practical transportation use, but the team is using it as an engineering experiment and eventually intends to break the speed record for combustion engine monowheels that lies at 117 kph.

Tesla’s Battery Day to be held on September 15