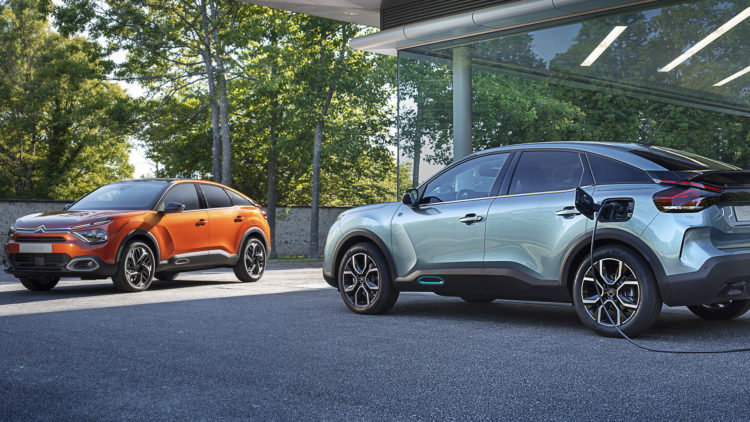 We've only just published details on Citroen's 9 seat eSpaceTourer when Citroen announces that it will formally present a new, all-electric C-Hatch in an attempt to shake up the EV market on 30th June. Given the size of the C-segment, the success of the e-C4 will be important for Citroen as it attempts to build real momentum in the EV market space. WhichEV analyses the available data and images.

For Europe, cars that are around 4.5 metres long are classified as belonging to the C-segment. Lots of hatchbacks, sedans and even some estate cars fit into the category and it is hotly contested. It accounted for around 28% of all European car sales in 2019. It's also a market in which Citroen has been competing for quite some time – ever since the original GS made its debut 50 years ago. Car of the Year in its second year of sales, the original GS was also the first car to cross the Sahara desert. That's some legacy for the e-C4 to measure up against.

Comfort will be the order of the day for the new EV, with progressive hydraulic cushioned suspension and an internal design that has been crafted to give a sense of openness. There will also be a full set of driver assistance systems but, at this stage, it's not clear what level of autonomy will be offered.

So what are we expecting from the Citroen e-C4 in terms of specification, performance and price?  Well, one thing is for sure: There is a ‘secret driver feature' that won't be revealed until the end of the month. Outside of that, we anticipate a car with a price tag under £28,000 and a key spec similar to this:-

Overnight charging on a 7kW unit with a Type 2 port is likely to take around 7 hours and you can probably get an 80% fast charge from a commercial 100kW DC unit using the CCS port in less than 30 minutes. The Ami that we saw in Paris earlier this year could also charge slowly (but conveniently) from a standard socket and we're likely to see that feature on the Citroen e-C4 – but make sure you have 24 hours set aside for charging if you plan on using a domestic plug.

Citroen pioneered the large glass roof, so expect a great panoramic view when driving. Price wise, if they can deliver under the £28,000 mark, then that should make senior management at VW take notice. In a post-lockdown world, with a serious recession ahead, you don't want to be the most expensive option on display.

We look forward to bringing you a full breakdown at the end of June. At the same time, we'll check back on our predictions to see how close we managed to get.