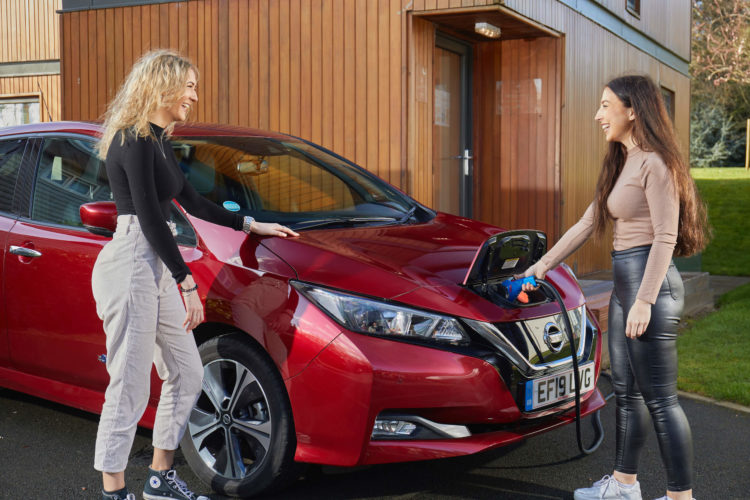 Western Power Distribution (WPD), in partnership with CrowdCharge, is launching the second phase of its Vehicle to Grid (V2G) trial across the Midlands, South West and South Wales. The trial, called Electric Nation, is opening up recruitment for domestic V2G users by offering the free installation of smart chargers worth £5,500 to Nissan electric vehicle (EV) drivers who live in those regions. Each supplier will use its chargers to test their various energy services utilising CrowdCharge’s demand management charger platform. CrowdCharge will be recruiting 100 people to help Distribution Network Operators (DNOs) and others to understand how V2G charging could work with their electricity networks.

Vehicle-to-grid technology allows an EV to be used as a battery pack, letting owners sell stored excess energy back to the grid when demand for it is peaking. Basically, your electric car will work as a decentralised power storage station. It will help to reduce the grid’s need for additional energy generation, either through fossil fuels or renewable energy, at peak times such as 5pm and 7pm in the evening.

V2G charging could transform EVs from a challenge in relation to grid capacity to being an important solution as an additional source of energy.  Smart charging will allow management of the time when EV charging occurs, as trailed by the original Electric Nation.

The technology is considered a game changer for the future of electric vehicles in the country, according to Roger Hey, WPD’s DSO Systems and Projects Manager. “V2G charging has the potential to transform how networks approach the challenge of keeping millions of EVs charged and moving. To introduce up to 38 million EVs to the UK network over the coming years would create great strain on the system, the equivalent of adding the electrical energy of London 14 times,” he said. “By harnessing flexible systems and introducing V2G charging, it means that we can build a far more efficient and flexible network that doesn’t require billions of investments and a huge uplift in capacity.”

This isn’t the only recent piece of news about V2G technology. We are seeing different automakers equipping their EVs with this new cutting-edge possibility. Even Elon Musk, who in the past was unsure of the technology because of concerns about the decay process of the battery, has now added the feature on the Model 3.

However, as we said you will need to be a Nissan owner to participate in the WPD trial. This second phase follows the first Electric Nation trial from 2018/19 that provided data from more than two million hours of car charging, revealing user habits on timings of charge. By plugging in at specified times and putting energy back into the grid, active participants of the Electric Nation Vehicle to Grid project are expected to earn a reward up to £120, available over the one-year trial period from March 2021 to March 2022. Recruitment will take place from June 2020.

Western Power Distribution (WPD) is not the only company working on this interesting project in the UK. Octopus Energy is also now testing the technology in the south-east of the UK with its ground-breaking Powerloop bundle, one of the world’s first mass domestic V2G projects.

These trials will serve as blueprints for the technology to be studied and consequently widely used on EVs in the future. At WhichEV we believe that the efforts made by these companies to offer a solution is going to drive us forward to an all-electric future.