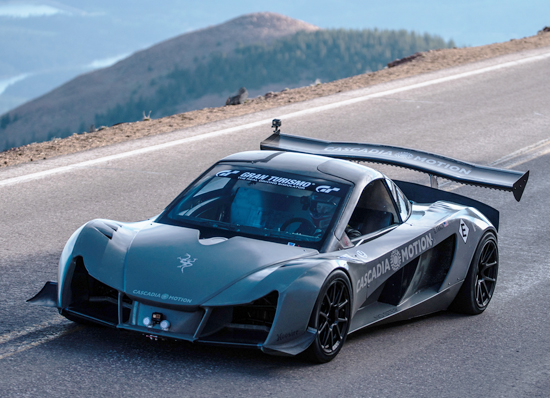 If you ask any motor sports enthusiast what the most extreme races in the world are, they might include the Dakar Rally, The Isle of Man TT, Le Mans, and anything that involves the Nürburgring. But another famous race that’s almost certain to be on the list will be the Pikes Peak International Hill Climb. Taking place in Colorado’s Rocky Mountains since 1916, at just 12 miles long it might not sound like much of a challenge. But the circuit includes 156 turns and climbs nearly 5,000 ft.

With many sheer drops to the roadside, the Pikes Peak course has claimed at least seven lives through its history. So it takes an extra level of courage to compete in the race – and a very special car. Due to the short course, extreme change in altitude and tortuous course, power-to-weight ratio is king, but also handling. Unlike most races, since the course is short, Pikes Peak can also pit electric and petrol vehicles against each other. And they have competed together, since 1981. In 2019, an electric car from Palatov Motorsport called the D2EV was in the running. WhichEV talked to the D2EV’s creator, Dennis Palatov, about how his vehicle fared.

The D2EV at Pikes Peak

Palatov’s vehicles were not new to Pikes Peak before the D2EV. In fact, this was the sixth car he had entered since 2012, and on all occasions, they had garnered trophies, including two category first positions. However, all previous entrants had internal combustion engines rather than electric. The D2EV is based on Palatov’s D2, a bespoke custom-designed street-capable track racer that normally houses a petrol engine with at least 430hp and can have up to 1,000hp. But in this case, Palatov was working with Cascadia Motion to go electric and take things even further. 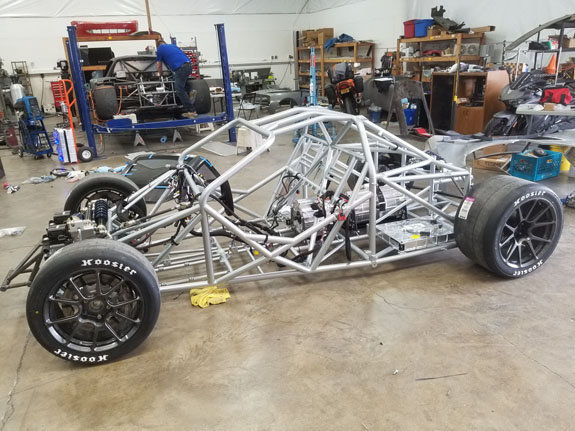 Cascadia Motion creates electric and hybrid propulsion systems for race cars and has supplied the Energy Recovery Systems for three Formula One teams, including Ferrari. Together, Palatov and Cascadia Motion created a monster. “The drivetrain delivers 1,300hp to the wheels (dyno tested),” says Palatov.  “In informal testing on a slight uphill, 0-60mph is around 2.4 seconds. The car does 0-120mph in 5.2 seconds and uses 501 feet to do so.” Weighing around 1,590kg, the D2EV has a power-to-weight ratio of over 800hp per tonne, around 56 per cent more than a Bugatti Veyron. 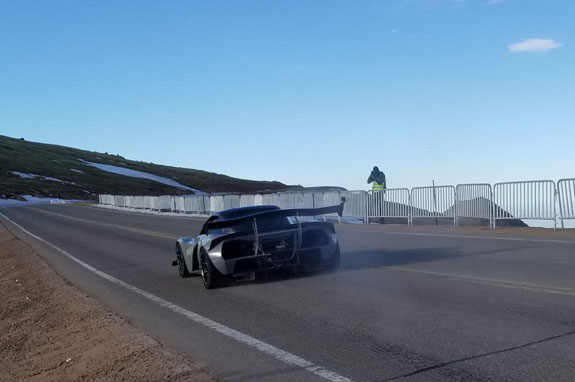 This would seem like an unbeatable combination, considering that in 2018 the Pikes Peak car record was broken by the Volkswagen I.D. R electric vehicle, which has a lower power-to-weight ratio and similar acceleration. The I.D. R completed the course in just 7 minutes 58.148 seconds, driven by French Le Mans champion Romain Dumas. Palatov hoped to do better, with his driver Greg Tracy, but the attempt was beset with problems. 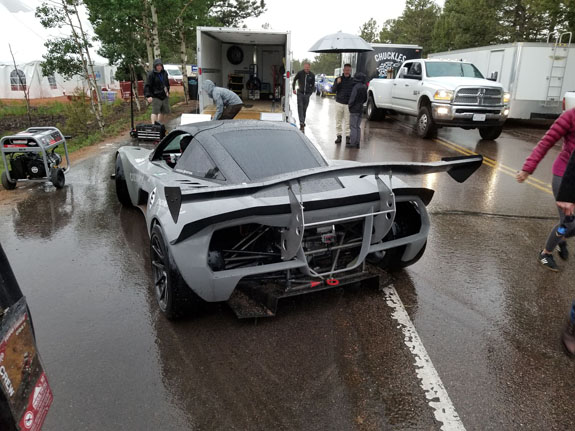 “The biggest achievement was finishing safely and overcoming all the endless challenges,” explains Palatov. “We were still developing the car and it was virtually undriveable up top on the bumps when we first arrived. We got the car sorted but didn't have enough opportunity to test to rebuild driver confidence and give Greg what he needed to push to the limit. He put in an amazing drive given the circumstances (including the fact that it was starting to rain by the time our turn came up). But if we had another week of development, we should have won overall. The driver is certainly capable (and proven), and I think the car finally got there or close by race day but circumstances did not favour us.” 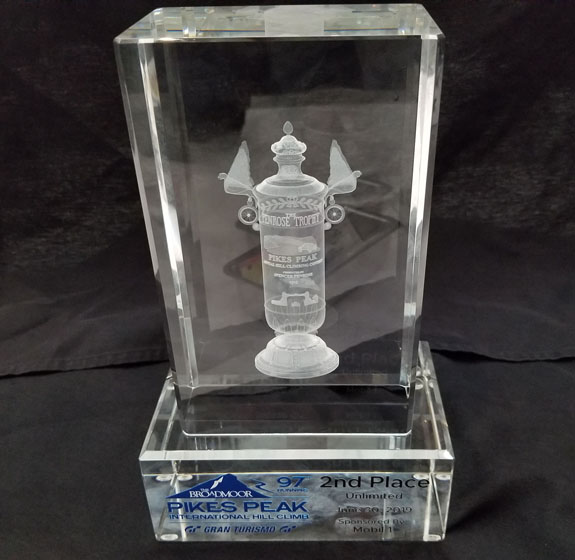 In the end, the D2EV placed 9th overall with a time of 9 minutes 55.011 seconds, and second in its Unlimited class. This achievement was particularly incredible considering that Greg Tracy drove this run after hearing that his close friend Carlin Dunne had died from a bike crash at Pikes Peak earlier in the day. However, the D2EV had another reason why it couldn’t fulfil its complete potential at Pikes Peak. Palatov was intending to take it to Bonneville Salt Flats straight after for some pure speed racing and had to make the car a lot heavier than necessary to achieve this goal.

“It was a multipurpose car,” explains Palatov. “It also had to do Bonneville and have a 300-mile street range. We only used 40% of the battery at Pikes Peak. If I were to design a dedicated Pikes Peak version of the car it would weigh around 2,300lbs (1,045kg) instead of the 3,500lbs (1,590kg) we raced at.” This would have given the D2EV an even more gobsmacking power-to-weight ratio of over 1,200hp per tonne – nearly 50 per cent greater – and it would likely have had an easier time handling the curves of Pikes Peak. But Bonneville Speed Week was the next stop for the D2EV, so it had to run heavy.

The trip to Bonneville in August 2019 soon after Pikes Peak was a major reason for the collaboration with Cascadia Motion. “The aim was to demonstrate the performance of Cascadia components in very different venues in the same vehicle, one month apart,” explains Palatov. “We had the power and setup for 265mph. We dyno tested and verified we had over 1,300hp which is what computational fluid dynamics told us we needed.” 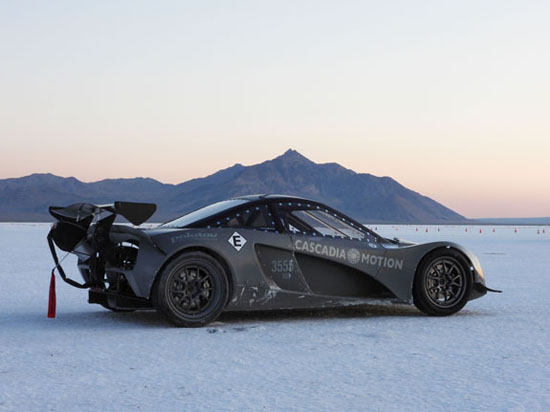 But at Bonneville, Palatov was again faced with a run of challenges and bad luck, including wet weather. “Unfortunately, salt conditions conspired against us,” he explains. “The changes we had to make to the car to meet specific technical requirements were also pretty extensive, so we ended up taking three days just to get through these. Still, we managed 197mph in a standing mile on slush, which was the fastest performance of the event on the short course.”

The D2EV was racing in the E3 class. “Bonneville is a very old race and still has old rules,” explains Palatov. “While there are numerous classes for gas-powered cars (by body type, displacement, fuel type, induction type, etc), there are only three for electrics at present, and they simply go by weight. In our weight class we were competing against the record set by the Buckeye Bullet, a dedicated streamliner that went over 300mph. We were racing with a streetcar, and still had to meet safety requirements for over 300mph. While we had no chance at the record, we would have gotten close to 265mph if the conditions were better.” 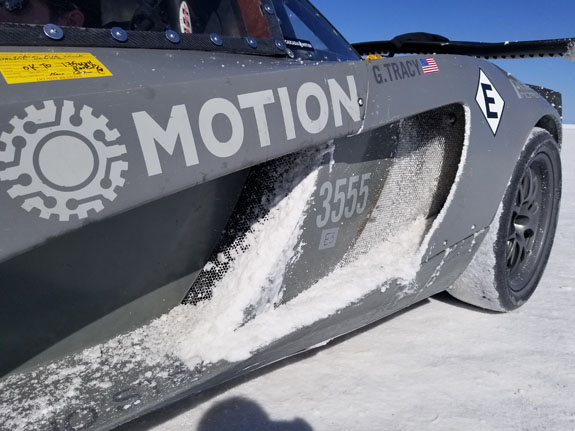 At Bonneville, there are lots of specific issues to deal with, including the way the salt clogs up openings like cooling vents. “The salt was the final challenge,” continues Palatov. “But the biggest was getting the car ready in a very short time and complying with the 300mph+ safety regulations. We had to design, build and get approval for numerous changes to the frame, seat, and overall driver safety package. This included tires and wheels capable of the speed, getting a parachute designed and made, and installing it. The learning curve was massive.”

A key part of what gives the D2EV so much engine power is how quickly its batteries can deliver their energy. Batteries are classified by C-Rate, which refers to how long it would take to completely discharge from full. The number is inversely proportional to time, and 1C means the battery takes an hour to discharge. Typically, EV batteries are rated at 5C, which means they can deliver all their power in 1/5th of an hour, or 12 minutes, without overheating and permanent damage. “Our packs, custom built by EVDrive, deliver 14C performance,” explains Palatov. “This means the pack can be safely drained in about 4 minutes, delivering a continuous 1MW of power. If the pack were less capable, it would limit the amount of power we could deliver to the wheels. In our configuration, all the components were perfectly matched (battery, inverters and motors), and no single component was a ‘weak link'.” 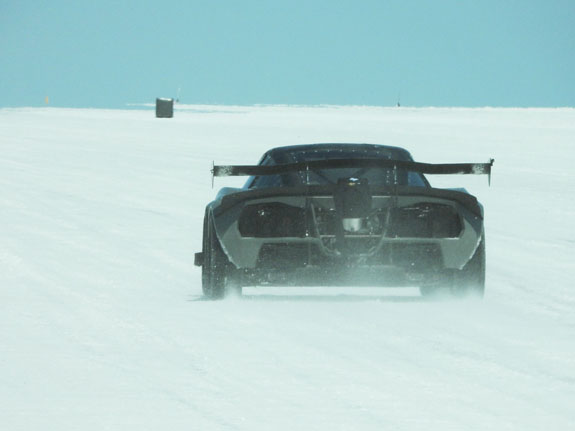 Despite the problems faced at Bonneville, the D2EV’s results are still extremely impressive. “By going 197mph in the standing mile, in difficult conditions, we proved that the car is very capable,” says Palatov. “The achievement of the entire team in prepping and running the car is something we are very proud of.” The plan after Bonneville Speed Week was to complete the trilogy with the World Finals at the same location in October. “We were scheduled to go back, but two days before the race the skies opened up and resulted in several inches of standing water on top of the salt, so the event was cancelled.” 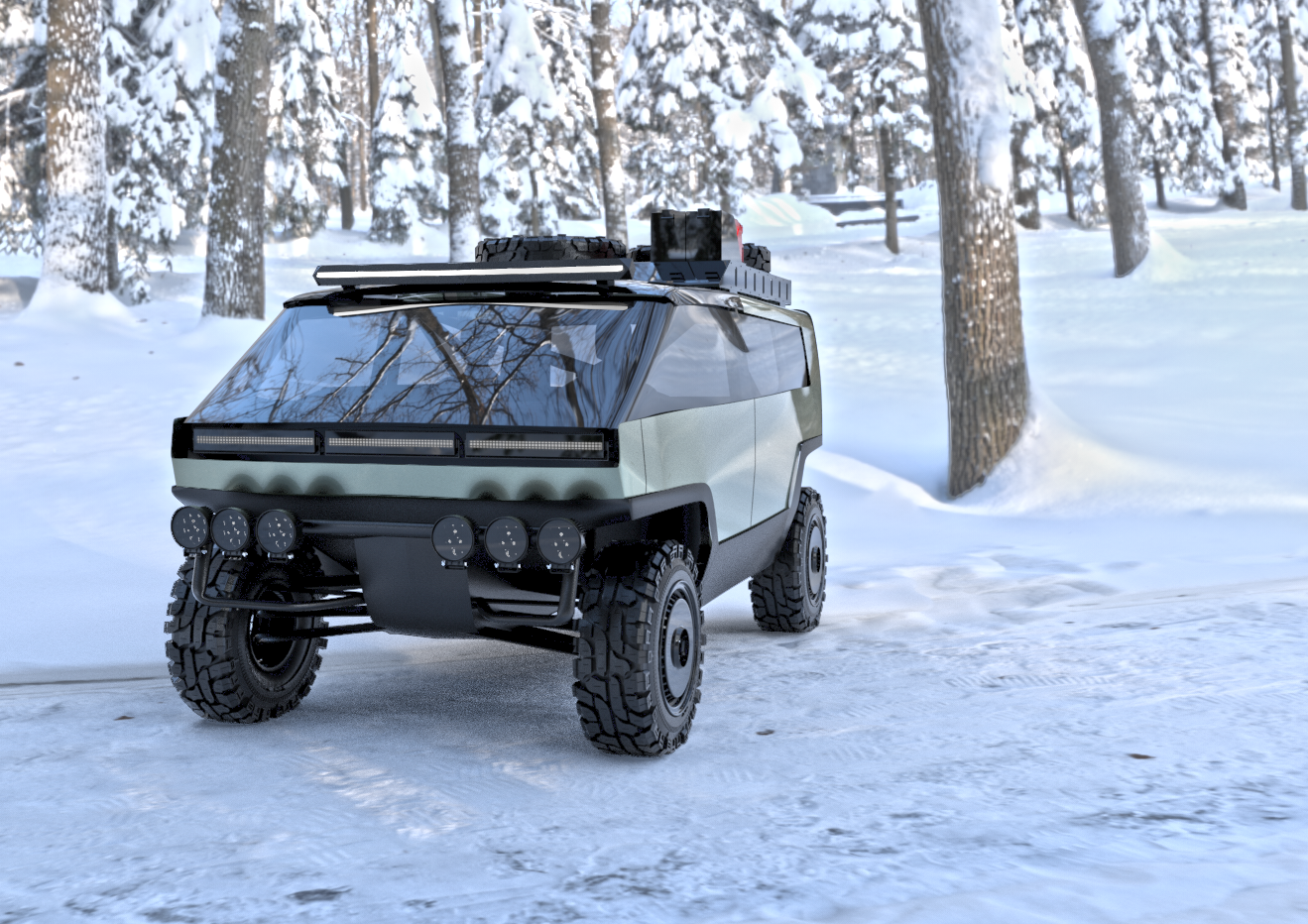 Who knows what the Palatov D2EV could have achieved without the bad run of gremlins that affected it – potentially a Pikes Peak win for EVs and a top speed over 250mph? Although it might be a while before EVs can compete against ICE cars in races that require a longer range with refuelling, there are already some competitions where they are showing true potential, and the D2EV showcases that in abundance. Palatov isn’t planning on returning to Pikes Peak with the car in 2020, if it even happens, but will be pushing the envelope for EVs elsewhere. “We don't have any plans to run this year but may come back in 2021 – or do a different venue. Off-road is of particular interest now.” In fact, Palatov is planning to put a similar drivetrain to the D2EV’s in a UTV, shown above. It looks amazing, and we really hope it sees the light of day, because that really would be the way to travel in the icy tundra – at exceptionally high speeds.

You can read more about Dennis Palatov’s various race achievements and projects on his blog.

GM claims to be close to million-mile EV battery