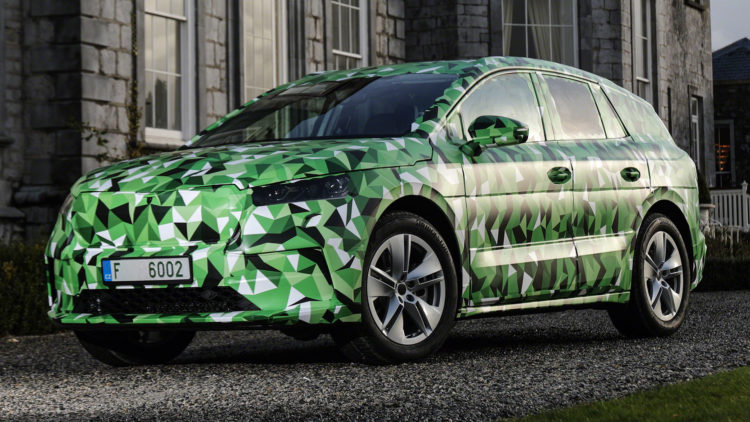 With the VW Group's ID.3 models getting close to £30,000 you'd have to wonder which VW-Audi brand will be the first to deliver a family sized car for less than £25,000?  Shots of the Skoda Enyaq have now been released that show that the launch is getting near. Based on VW's modular MEB car platform, there will multiple versions to choose from, including three battery options and five power variants. With so much choice and a proven engineering platform – can the Skoda Enyaq can play an important role in getting sensibly-priced EV motoring to the masses? WhichEV investigates.

The long-range version of the Skoda Enyaq is the iV 80, which claims to be able to carry you just over 300 miles. From the available information, we've created a table of the initial models. The speed and acceleration numbers haven't been released yet, so we've estimated these in light italics and we'll check back after the official launch to see how close we were. As you would expect, ranges are in miles, speed and acceleration are in mph, battery capacity in kWh and power in kW:-

The flexible platform system should provide a win for Skoda when it comes to controlling costs and speeding up time-to-market. The 50, 60 and 80 models are rear-wheel drive, the X and vRS are AWD.

In the old days, the VW group had a really flexible 1.9-litre fossil fuel engine solution to many needs. It could be geared one way for a sporty coupe or another way to provide the powerplant for a workhorse commercial vehicle.

The same psychology should apply with Modularer E-Antriebs-Baukasten – the modular propulsion system known by the acronym MEB. In computer terms, MEB is the VW version of a PC – with as much modularity as practical. Technically, there are two versions – one for consumer cars and one for larger vehicles.

The onboard charging system should get you from 10% to 80% in just 40 minutes, although the spec information we've seen suggests that you will be capped at a 150kW commercial fast charger. Normally we wouldn't flag that as a limitation, but Skoda is part of the group working with Ionity to install Europe's fastest charger network – with the top chargers able to deliver 350kW.

So what about space and comfort? A lot of that comes down to the available space. The boot claims 585 litres, but unless you're storing liquids, the actual usable space will have more to do with the shape of the boot and how much you have to lift in order to get suitcases etc inside. Skoda says that the loading sill is low for an SUV, so that could be good news for family buyers.

The below comparison of Skoda's recent design DNA shows that the new Enyaq iV (left) is just a little chunkier in every department, when compared to the Kamiq (centre) and Karoq (right).

Christian Strube, Skoda Board Member for Technical Development, said: “The many possibilities of the modular electric car platform allow us to offer the perfect Enyaq iV for a wide range of requirements and applications. This includes an entry-level version for families, which offers a lot of space and functionality, a variant for the long-distance driver for whom the greatest range is key, and a model for the customer with sporting ambitions who is looking for maximum performance even in an electric SUV.”

The car also features what the company likes to call ‘Skoda typically clever' features, which you can learn about here.

Set to be built in Skoda's main plant in Mladá Boleslav, the original plan was to start taking orders around September 2020. The global pandemic may have disturbed that timeline.

The initial 1,895 units will be special editions but, after that, maybe we will get a price that can challenge the MG ZS EV. Skoda has, traditionally, offered SUVs in the sub-£20,000 sector. We were expecting the Enyaq iV 60 model to be close to £30,000. With the combination of a tough economic environment, VW-Group's increased experience with electric cars and potential savings from using the latest production line and battery options, you have to wonder: How close can Skoda get to the magic £25,000 mark with the Enyaq iV 50?

Tesla 'singled out' but does Musk really plan to move out of California?