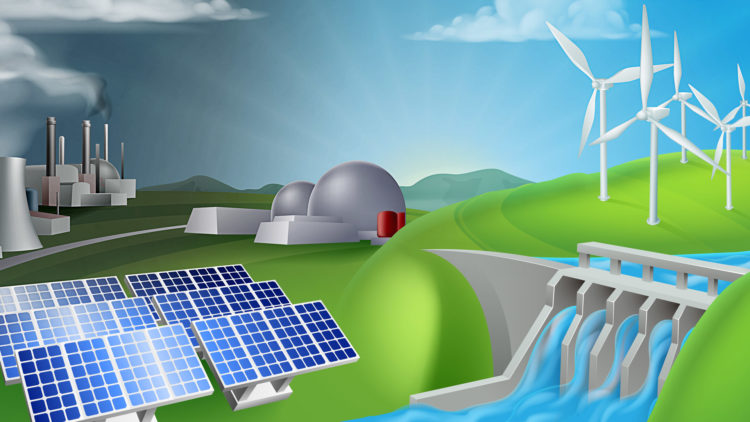 A new report from BloombergNEF (BNEF) shows that solar, onshore wind and battery have become increasingly competitive options – specifically when compared to coal and gas over the past six months. The report collected data from over 7,000 projects spanning 25 technologies, including gas, coal and a variety of renewables from across 47 countries. Considering the vital role that these energy sources play in the charging of electric vehicles, WhichEV investigates how the green credentials of electric vehicles are being improved.

The BNEF research revealed that solar and onshore wind energy are the cheapest sources of new-build generation for two-thirds of the global population, reaching 85% of the generation of energy. Meanwhile, battery storage is the cheapest new-build technology for peaking usage in regions where gas is imported, such as China and Europe.

In the second half of 2019, the cost of electricity for wind and solar PV plummeted 9% and 4% respectively. Onshore wind faced its biggest fall in the last five years due to the expansion of turbine size, which is now around 4.1 megawatts, with one megawatt priced at about $0.7 million. Wind farms doubled in size from 32 megawatts to 73 megawatts  in 2016.

Tifenn Brandily, author of the report, said: “Larger scale enables them to slash balance-of-plant, operations and maintenance expenses – and have a stronger negotiating position when ordering equipment.”

There also seems to be a place for competition in the power sector of PV leader China. China has a solar benchmark of $38/MWh, down 9% from the second half of 2019 due to quick developments in the performance of mono-crystalline modules. The cost of new-build solar PV in China is almost equal to the operating cost of coal-fired power plants, amounting to $35/MWh.

BloombergNEF suggested that the cheapest PV projects financed in the last semester will see the cost of electricity settling between $23 and $29 per megawatt-hour, giving a decent return for equity investors. These projects have been agreed in countries where they will compete with existing fossil fuel power plants, such as China, Australia and Chile.

The benchmark levelised cost of electricity for battery storage has halved its value to $150/MWh compared to two years ago. Even for battery storage, the scale-up has caused a reduction of costs: the increasing capacity of projects and the development of more energy-dense chemistries and of industrial base have reduced by half the benchmark cost of electricity of energy storage.

China has the cheapest storage levelised costs globally, priced at $115/MWh, which is due to the localisation of the supply chain and the extensive use of cheaper lithium iron phosphate chemistries.

However, BloombergNEF confirmed that the data collected did not reflect the economic consequences of the Covid-19 crisis.  Seb Henbest, chief economist at BloombergNEF, warned that the coronavirus will have a different effect on the relative cost of fossil and renewable electricity. The renewable energy sector has to look closely at “the costs of finance over the short and medium term and to commodity prices as coal and gas prices have weakened on world markets”.

He added: “If sustained, this could help shield fossil fuel generation for a while from the cost onslaught from renewables.”