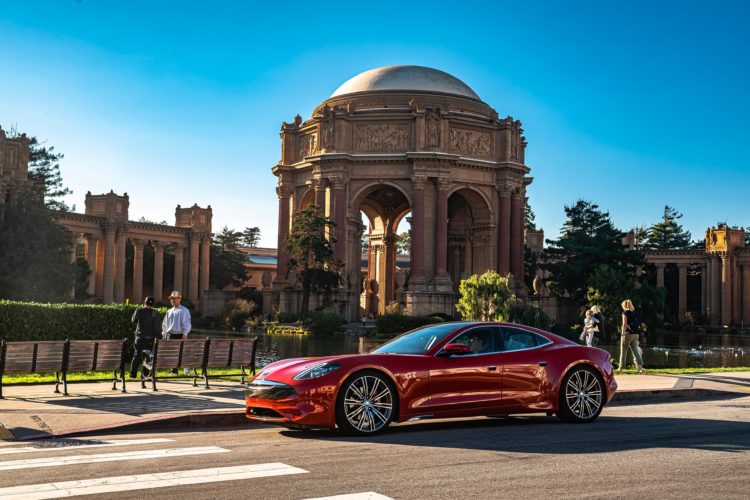 The luxury EV car market has been given another boost by the news from Karma that its first pure-electric model, called the Revero GTE, will be launching in early 2021. If the GTE sells in any kind of volume, it will deliver more than a positive image and valuable revenue for Karma. It will also generate publicity for the company's E-Flex platform – with the added hope of attracting potential trade customers. WhichEV checks out the latest offer from every angle.

On paper, the specs certainly look impressive for the GTE with 0-60 mph acceleration in less than 3.9 seconds, electronic torque vectoring, 150kW Fast Charging (with a hoped for 80% charge in under 30 minutes), 200 miles on a 75kWh battery and 300 miles on a 100kWh battery (with promise of an eventual 400-mile model to follow). Combine that with the stunning look of Karma cars and you've got something that is a lot prettier than Triton's recent boxy SUV and could give any future revamped Tesla Model S a run for its money.

Once the car is on sale – and if it lives up to its billing – it will be a remarkable return to form for the company. Originally called Fisker, that iteration went bankrupt in 2013, but the company’s assets were bought by Chinese auto parts company Wanxiang Group. Since then, a lot of time, energy and investment has been poured into the company – with a view to bringing it back in style. Judging from the images we're seeing, all that hard work seems to be paying off. The dual electric motor-powered hybrid Revero GT is now being rolled out and was Green Car Journal’s 2020 Luxury Green Car of the Year.

Sales for the company, which mostly assembles cars by hand in California, have been modest but acceptable, given its vehicles' six-figure cost. Last year it is believed more than 1,000 units were sold of its hybrids or range-extender models. Bear in mind that Karma also has the gorgeous looking SC2 in the pipeline too, so the firm is much more than a one-hit wonder.

The thinking behind the E-Flex platform the GTE is based on is solid: creating the drive systems is an expensive business so let Karma take the stress out of that part of the car making, allowing car manufacturers to focus on other elements. E-Flex isn't just about a base unit for vehicles, though. It also integrates software, AI and hardware into the package.

Karma reckons that the E-Flex Platform can be used in 22 different possible configurations when you take into account batteries, drive systems and other requirements.

The company isn't shy in admitting that's part of their goal as well.

“Our Revero GTE is a reflection of Karma's in-house engineering and technology capabilities,” said Karma's Vehicle Platforms Manager Carlos Gonzalez. “By creating GTE on a Karma E-Flex Platform, we can showcase another mobility option for customers who have shown interest in this sustainable solution, in addition to potential partner companies interested in the platform technology for their own use.”

The GTE is scheduled for release in Spring 2021 in the US and Autumn 2021 for Europe and China with the hoped-for 400 mile range version appearing by the end of that year. No details on pricing have been released yet and pre-ordering will open in the summer of 2020.