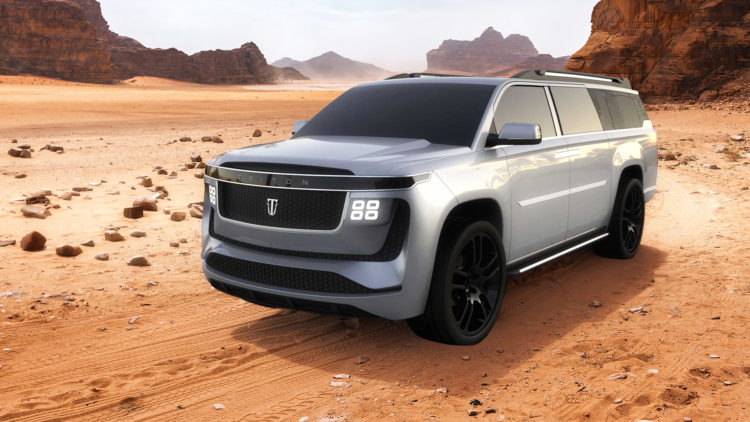 An electric SUV with a 700 mile range (1,125km) that can accelerate to 60mph in under 3 seconds and can tow up to 12 tons, sounds incredible – but that's exactly what a new manufacturer called Triton is promising. The specs don't stop there either, because it can offer seating for up to eight people, up to 5,600 litres of storage and all covered with a 10 year/150,000 mile warranty. Oh, did we mention that the battery can power your house when necessary?  WhichEV digs a little deeper.

Meet the Triton Model H. It sounds utterly amazing, even with a price point of around £115,000 ($140,000) for the Founders Edition. The Model H will be produced by Triton, a spin-off of Triton Solar, a New Jersey, USA, based company that's been servicing the energy storage sector since 2012.

It's a very boxy-looking SUV – more in the style of larger-framed American vehicles than Tesla's Cybertruck – and may well be perfect for a certain market, perhaps those who like the Chevrolet Suburban or the Cadillac Escalade.

Oh. Did we mention that the entire roof is an advanced solar panel?

It all sounds too good to be true – even with the six-figure price range – and this is where the problem lies. The Model H has come from nowhere. As launches go, it's the very opposite of what Elon Musk would do.

The funding model is what might give you pause for concern. For the Founder's Edition you paid a deposit on day one – a few thousand pounds – and then you were expected to pay the outstanding balance for the vehicle, around £110,000, within one business week. That's quite the weekly spend.

Now, none of this is illegal, there is nothing suspicious here, and there's no negative press around those associated with the company or the parent company. But in these financially challenged times, it's quite a request to make of people. Even Kickstarters rarely ask for so much in such a short period of time.

While this sounds like an amazing car, let's pause for some consideration here. We aren't saying that this is the next Faraday Future or that the vehicle isn't possible and that the company's claims aren't credible. In fact, we wish them all the best. But there's a lot going against them:

In short, there's a lot of information missing at this stage, which means that they've failed to achieve an ‘easy win' by build maximum credibility and sticking close to to the parent company.

Strangely enough, the one thing that isn't off about this is the timing of the launch. Given the price tag of the EV, this isn't aimed at Americans worrying about their month-to-month payments. This is for people who have considerable income in the bank. It's aiming to be an EV equivalent of a top-end iPhone 11 Pro. Apparently, the first 100 models will be Special Editions of the Model H, at a higher price, and we're told that these have already sold out. That said, we haven't seen too much buzz on social media from the ‘lucky 100'.

Every new market follows the same pattern of invention, followed by lots of innovation and investment, before the inevitable march to oligopoly. The Triton Model H is certainly innovative and, on that basis alone, we wish them luck. EV enthusiasts want to see engines with crazy torque and a claimed range of more than 1,100km. We'll let you know if the delivery matches the promise.

Should EV acceleration be legally limited for safety reasons?