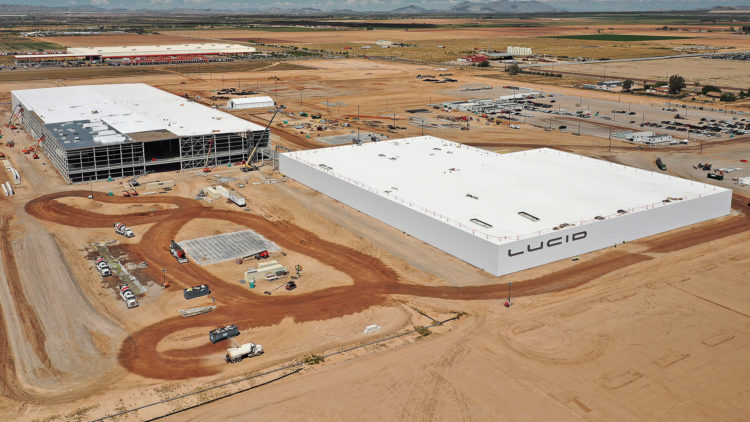 It might well start with a dream, but most EV plans need to rapidly nail down a winning battery solution. Lucid's announcement in February that it now has a long-term partnership with global battery-tech leader LG Chem, means that we're one step closer to seeing its 200mph (322km/h) luxury salon hit the market. To reinforce the feeling of progress, Lucid has made images of its giant production centre in Arizona available – along with details about how the company will positively impact its surrounding community. WhichEV gets insight from one of Lucid's leaders.

As we write this piece, most of the world is under some form of lockdown. Luckily for Lucid, its production centre development was well ahead of schedule before Arizona's stay-at-home order was issued.

“Lucid’s manufacturing equipment suppliers remain committed and in a state of readiness”, said Peter Hochholdinger, VP of Manufacturing. “For the most part, tooling and machinery for the Arizona factory was well underway before the current crisis. The completion of these critical manufacturing components is still being scheduled to synchronise with the completion of the factory”.

We announced on 3rd December that construction had begun and things have moved on at pace since then. With the roof completed and the sidings nearly there, Lucid's construction team even managed to get the massive logo in place on the side of the building before workers had to down tools, Hochholdinger explained.

So what about the impact that this project will have on the local community and Arizona overall?

At city, county and state level, Lucid is expecting a lot of positives from the production of its luxury electric vehicles, including:-

On paper at least, the all-electric Lucid Air looks impressive. When Hyundai completed a major survey of potential EV drivers toward the end of 2019, the number one issue was ‘Range Anxiety'. Lucid's fundamental designs plus LG Chem battery deal, means that the Air is looking at a range of close to 400 miles (644km).

Getting to 60mph from a standing start in around 2.5 seconds, means that it hopes to be posting some of the best acceleration figures that we've seen and there are only a few places on the planet where you'll be able to put your pedal to the metal at 200mph.

It's hard to level any criticism at Tesla. By and large, they've nailed most of the technologies and designs that they've put their minds to. The only area where we see any issues being raised is with the interior. Specifically, the lack of a speedometer when you're in a car that can hit license-losing territory in a matter of seconds. Lucid's interior is plush in comparison. Maybe not top-of-the-line German plush, but certainly in a different class to most EV interiors.

Should VAT be scrapped for electric vehicles?