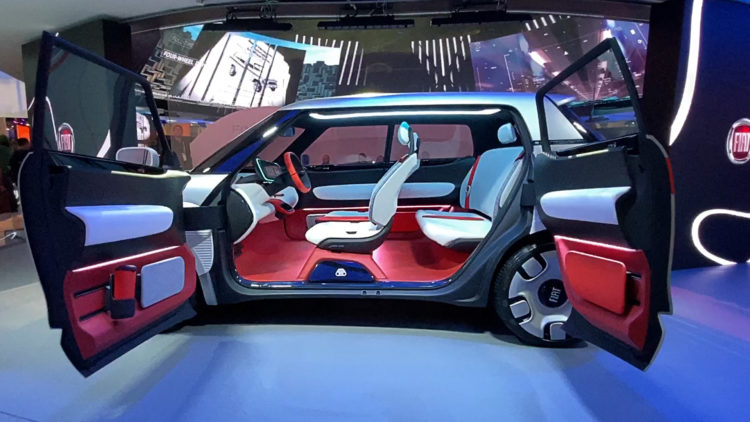 When we got hands-on with the brand new Fiat 120 (Centoventi) at CES earlier this year, we were told in no uncertain terms that this car was a concept only and that we should not expect to see anything like it on the roads before 2023. Now FCA (Fiat Chrysler) is moving full steam toward electrification, it seems that the road from concept to showroom might be a little more direct that we were led to believe. WhichEV examines this distinctive design.

Having launched the world's first fully electric city car with autonomous level 2 driving capabilities in the form of the 500e, Fiat is now looking at a much more affordable car. While the 500e is gorgeous, flexible and intelligent – it is also close to £30,000. Considering you can get a regular (less intelligent) Fiat 500 for less than £15,000, it's clear that early production models of the fully electric cars carry a premium. Sure, running costs will come in to play, but lower prices are needed to drive this market forward.

While the design itself is pretty stunning, it's spirit is a lot closer to the early 70s Fiat 126 than the luxurious Fiat 500e. The number 120, represents the 120th anniversary of the Fiat motor company itself. A good time for Fiat to revisit its roots and decide what its brand means in 2020.

At the concept's first major outing, it's award-winning design was received as a series of cool concepts that might influence other designs in the future. However, the extraordinary number of pre-orders placed for Tesla's Cybertruck seem to have given the rest of the market a lot of confidence when it comes to moving concept to construction.

The question then becomes, how many of the rumoured features will make it to the floor at Mirafiori?

Adjustable Battery Configuration
Using a system of rails under the floor and seats, means you can buy the cheapest model in the range and, later, easily upgrade the battery pack for extended range. Also, you might want to keep a spare add-on battery at home, fully charged, for unexpected journeys. If true, this would be a stand-out feature for the final production car.

Modular Dashboard
Plug and go takes on a whole new meaning when you have a circuit-board design where cup, phone and magazine holders can be stuck anywhere on the dashboard. We saw something similar with the recent launch of the Citroen Ami, specifically to do with easy, low-cost colour customisations (think Nokia 90's phones).

Rear Window Messaging
An absolute cracking idea, but one which might hit legal challenges in several countries. The UK government is very keen that drivers should keep their hands on the wheel when driving – avoiding distractions. Might be hard to resist ‘messaging' the van that just cut you up with some choice phrases.

Whatever Fiat's final choice on customisation options and replacement/add-on battery strategies, the real killer here will be the price. There is strong evidence to support the idea that Dacia (Renault's Romanian arm) will be able to deliver an electric car at a price point a lot closer to £10,000, before the end of 2021.

The ability to add extra batteries to a Fiat 120, extending the range to more than 300 miles will be a draw, but can Fiat get the price closer to £15,000 for the baseline model?

Ironically, high-end electric cars will actually prove to be much better value for the market, as they will often be company car leases – and the reduction in personal income tax liabilities for non-fossil fuel company cars will make EVs very attractive.

For an overall win in the consumer sector, Fiat needs to land this product at the right price.