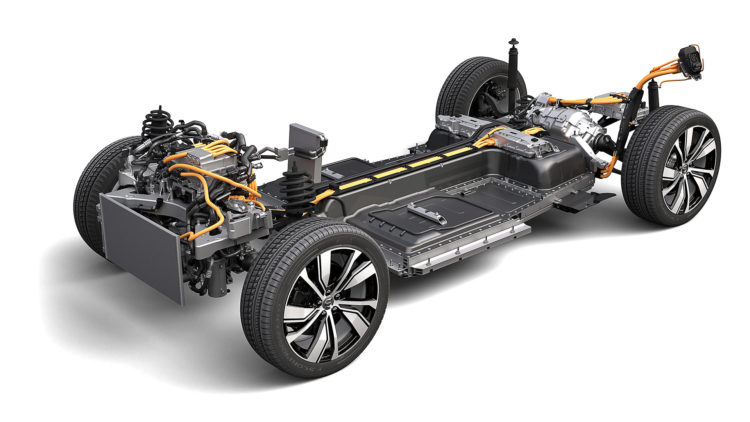 There's no way a major car manufacturer can move forward with their plans for electrification, until they have a battery production facility in place. VW and Fiat have been pouring money into fabrication plants in Germany and Italy respectively – now it's the turn of the Chinese-backed Swedish car company, Volvo. WhichEV examines Volvo's plans to ramp up battery and car production.

Spurred on by the big changes in company car tax and various fines for driving fossil fuelled cars in major cities, Volvo is moving with speed to start building its first fully-electric car, the XC40 Recharge. As part of that journey, Volvo celebrated the inauguration of a new battery assembly line at its Belgian manufacturing plant in Ghent.

As Volvo steers towards reducing its lifecycle carbon footprint per car by 40 per cent between 2018 and 2025, the assembly line is seen as an important part of that journey. The company aims to be a climate neutral (although ‘carbon neutral' sounds a more obvious  phrase, if you ask us) by 2040.

Part of that will come from improving the vehicles themselves, and another big chunk of the reduction comes is the result of switching from road to rail transport for finished vehicles moving between the factory and storage/distribution depots.

“When we said we planned to significantly reduce emissions across all our operations, we meant it”, said Javier Varela, Senior Vice President of Manufacturing and Logistics at Volvo Cars. “Our logistics network is just one piece of that puzzle, but an important one nevertheless. This is one example of our commitment to reducing our impact on the environment through meaningful, concrete steps”.

“I am pleased to celebrate this momentous occasion with our employees here in Ghent,” said Geert Bruyneel, head of global production operations. “As the first of our plants to get a battery assembly line, Ghent plays a pioneering role as we continue to prepare our manufacturing network for electrification”.

The Ghent plant will have another important role to play, beyond that of battery assembly. Volvo also hopes it will work as a learning site for other battery plants across the globe, in terms of helping optimise plant production and efficiencies.

The current plan is for efficiencies learned in Ghent to be applied to a planned battery assembly line at its US plant outside Charleston, South Carolina and at a Volvo-operated manufacturing plant in Luqiao, China.

Ghent is one of two car manufacturing plants operated by Volvo Cars in Europe and has produced Volvos since 1965. At the moment it employs around 6,500 people. It's unclear at this stage, if these numbers will be affected by the Coronavirus pandemic.

The XC40 Recharge P8 is the first of a family of fully electric Volvos. It is the company’s first fully electric car and the first Volvo with a brand new infotainment system powered by Google’s Android operating system.

The XC40 Recharge P8 is based on CMA, an advanced modular vehicle architecture co-developed within the Geely Group. It's this kind of approach that should see the price of electric vehicles drop below their petrol/diesel counterparts in the near future. Fewer parts per car and a shared base of technologies, means lower cost of production.

The first Recharge will have two 100 kW (201 hp) electric motors that’ll combine to a massive 200 kW (402 hp) of power. This has been made possible thanks to the car’s four-wheel-drive (FWD) system, whereby a motor is mounted on each axle. The SUV has a top speed of 112mph (180km/h) and achieves 0-60 mph in just under 4.9 seconds. With an expected on the road weight of just over 1,800Kg, compared to the 1,726Kg for the Tesla Model 3, it's hard to know why their respective acceleration and top speed numbers should be so far apart.

Elsewhere, the vehicle’s 78kWh battery has a claimed range of around 248 miles, which is very respectable. The car supports regular home charging and 150kW DC commercial charging stations. Volvo claims this will give the SUV an 80% charge in just 40 minutes.

Volvo has opened its order books for the XC40 Recharge in the US and a few select European countries. The SUV can now be reserved with a €1,000/$1,000 refundable deposit.

Now it has its own battery production locked down and a modular construction system coming online, we're looking forward to see a more mainstream-affordable car from Volvo in the future.