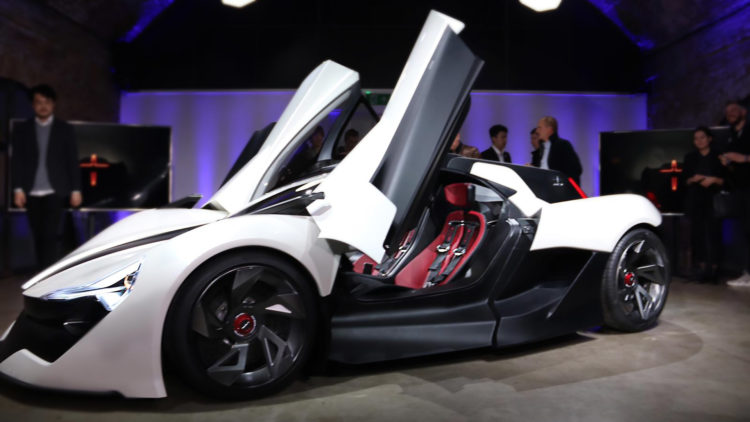 The revelation of the Apex AP-0 at the Bike Shed in London's Shoreditch, was nothing short of stunning. With a carbon fibre composite build weighing just 1,200Kg and a 650bhp electric motor at the heart of its design, the 484kW Apex AP-0 has been designed in the UK, with the aim of hitting 190mph on the track, while setting you back just £150,000 in the showroom. On paper, the specs would make any car enthusiast salivate, but was that enough for WhichEV to fall in love?

The teardrop-shaped glass roof fuses into a structural, aerodynamic fin, that has clearly been influenced by Formula 1 and Le Mans styling.  When we tell you that this exotic arrangement houses an advanced LiDAR camera – you will get an idea of what this car is all about.

Blistering performance, intelligent driver support and a maximum range of close to 320 miles (WLTP), this car offers a rare blend of practical technologies with impractical (but highly desirable) performance. If you have access to a CCS charger, Apex expects you to get an 80% charge in less than 15 minutes.

Until recently, the world of super/hyper-cars was dominated by fossil fuel guzzling monsters with V8/10/12 engines and 0-62 speeds of less than five seconds. The days when that kind of performance was enough to get the juices flowing are long gone.

The average F1 driver will tear away from the line with a 0-62 speed of around 2.5 seconds. The engine alone in an F1 car can cost more than £8 million. Thanks to a lot of technological advances, the latest electric cars can easily match those numbers – and at a fraction of the cost.

Challenging those precepts is Apex, a Chinese owned independent car manufacturer, based in the UK, and with a design team led by Guy Colborne. He had one goal in mind when the AP-0 project began: Connectivity. By hooking up the chassis, ground-effect bodywork and diffusers, it would be possible to create an immensely engaging driving experience, where car and driver are as one.

Handling is aided by the low centre of gravity provided by the 90kW floor-mounted battery pack. The various features of the AP-0 allow it to weight in at just 1,200kg.

Controlling the weight of the Apex AP-0 was crucial in the design. There is a well established relationship between body weight and the amount of electrical capacity that can be stored within a car. The AP-0 looks to push the limits on this relationship, giving the vehicles an adrenaline inducing combination of rapid acceleration, superior agility and great handling in corners.

We've analysed the Battista by Pininfarina which is basically an electric rocket on wheels that can go from 0 to 62 in under 2 seconds – and we also gave you a tour of the incredible Lotus Evjia that promises a top speed of around 200mph. When it enters production toward the end of 2022, the AP-0 is looking to complete with that kind of performance, but at 10% of the price tag – much closer in fact to £150,000.

The real challenge for Apex will be the Tesla Roadster.

With Elon Musk promising a top speed of more than 250mph, acceleration from 0 to 60 in less than 2 seconds and a maximum potential range of 620 miles – with a price tag around £220,000 – everyone else has their work cut out for them.

This is without doubt one of the most futuristic cars we've ever seen. Externally, it looks ready to complete in the Le Man 24 Hour Race. Internally, it is a strange combination where Tesla meets Lamborghini. Extreme and futuristic, while maintaining the kind of minimalism you'd expect from a competitive racing car.

Bare carbon fibre composite, pearl white paintwork and a dramatic red interior, combine to create an external expression of the car's internal dedication to speed and power with a sporting ethos. It works very well, although we were not 100% in love with the car's design from every angle.

Apex Motors was founded in 2018 by brothers Jason and Gary Leung. They normally specialise in high-performance automotive and Formula 1 race-car engineering, vehicle dynamics and systems as well as overall automotive design and styling. We're glad that they have decided to turn their skills toward evolving a road-legal product and can't wait to see the final car's on-track performance.