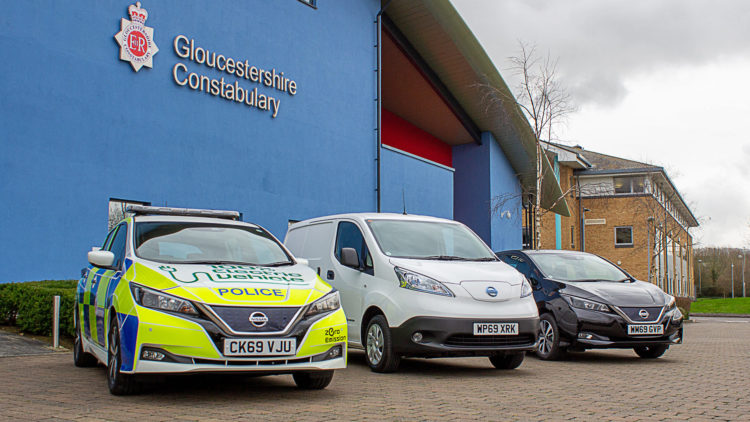 The long arm of the law is going green with Gloucestershire Constabulary converting one-fifth of its fleet to EV – and hopes to increase it further in coming years. The constabulary has now taken delivery of 75 electric vehicles from Nissan, including 66 LEAFs and nine e-NV200s. WhichEV inspects the decision and gives its verdict.

LEAFs have already been used by various regional police forces over the past five years and they seem to have proven their worth. Across the globe, more and more law enforcement agencies are looking to use EVs where it is practical and sensible to do so.

It's easy to see that there will be a number of benefits to the force, including savings of up to £136,000 a year in fuel and maintenance, as well as a reduction in CO₂ output by more than 190 tonnes a year.

“In our history of the Nissan LEAFs, on the 16-plates, we’ve only changed one set of brake pads,” said Head of Transport Services for Gloucestershire Constabulary Steve Imm. “Because of the regenerative braking you don’t use brake pads or brake discs as much”.

This is something that we've asked Nissan about in the past and it seems that future electric vehicles might be programmed to deploy ‘full brakes' on a periodic basis (as opposed to regenerative braking), to prevent the mechanism from seizing up.

“We’re cutting down huge amounts of labour and off-the-road time, which improves our internal efficiency and means the police force has the vehicles on the road more”, he explained.

According to Imm, existing cars drive an average of 70 miles a day, which is well within the LEAF e+ vehicle's ability to travel up to 239 miles on one charge, while the e-NV200 is capable of up to 187 miles. The constabulary uses 7kW chargers to replenish the vehicles at night time.

The use of these electric vehicles is part of a five-year plan from Gloucestershire’s Police and Crime Commissioner Martin Surl to create ‘A Green and Pleasant County’, and ensure that Gloucestershire Constabulary operates in a way that is as responsible and sustainable as possible.

“The new fleet will save a considerable amount of CO₂ and money, giving Gloucestershire a larger percentage of fully-electric vehicles in its fleet than any other force,” said Surl. “I hope the constabulary will be able to build on this great work, and extend its electric fleet to 40 per cent within the next four years”.

The deal is also good news for Nissan, coming just after signing large orders with Uber for LEAFs and DPD for delivery vans.

“We are really excited to be working with progressive organisations in their pursuit of net zero,” said Nissan Motor GB Fleet Director Peter McDonald. “We are working with a number of organisations piloting major initiatives in the corporate and public sector space, and are really excited to announce this partnership with the Gloucester Police Force”.

He continued, “Through their pioneering work Gloucestershire are showing how EVs can be used in all kinds of practical applications, and how with some initiative blue light fleets are able to play an active role in decarbonisation. We applaud Gloucester Police Forces and are proud to be working with them.”

This is exactly the kind of initiative that WhichEV wants to encourage and promote.

If you want to find out more about how you can move your business to electric vehicles and reducing both your emissions and your maintenance costs, we suggest you contact an experienced, independent leasing firm today.