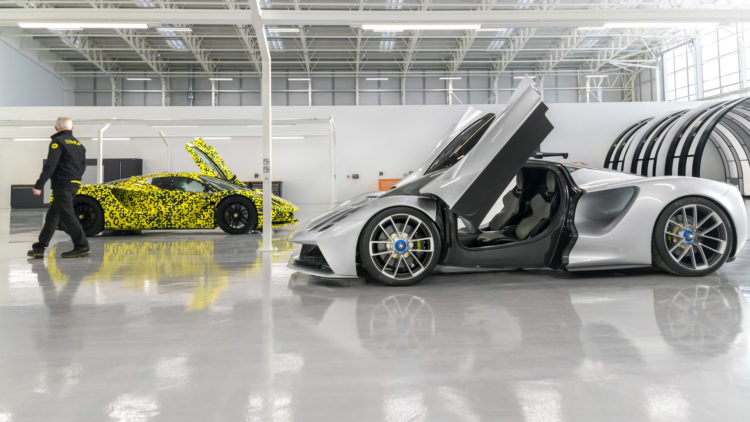 Over 1,400 Lotus employees have been given a tour of the brand new production facility that will be dedicated to the company's first electric hypercar, the Evija. The building sits track-side at Lotus' Hethel headquarters in Norwich and it's about to see the last pre-production units come off the line for final testing, ahead of a ramp up to full production. WhichEV checks the specs as the 130 pre-ordered cars are getting ready to be built.

While Lotus already had a long standing relationship with the world's most famous races, its landmark moment as a brand came in 1977, when James Bond evaded a helicopter gunship in his white Turbo Esprit by driving it into the ocean. Instead of sinking, the wheels folded in and it became a submarine, taking out the helicopter with a missile strike. The Evija might not be armed and sea ready, but the shape is undeniably attractive and Lotus wants to make sure that it is ‘driven, not left unappreciated in a gilded cage'.

At first glance, the specification looks impressive. It will hit 60mph in just under 3 seconds, with a top speed of more than 200mph and a range close to 250 miles. Unfortunately, there will be faster models out there. Sitting on an extraordinary price tag of nearly £1.6m it will be going head to head with the similarly priced, but slightly faster Pininfarina Battista and the much quicker, much cheaper Tesla Roadster.

Arguably the coolest spec on the Lotus Evija, is the claim that it can fully charge its batteries in just over 10 minutes. We understand that hitting 80% at high speed is relatively straightforward, but most systems will switch to a trickle charge when they get close to full – in order to protect the battery mechanics. Could it be that Lotus has invented something rather smart in the charging section of the car?

Phil Popham, CEO, Lotus Cars, was able to make one very clear claim, “This is now the newest car production facility in the world, and to witness it move from the drawing board to reality has been deeply satisfying. It’s testament to the commitment of all involved, and is the perfect sleek and high-tech production home for the Evija at our iconic Hethel headquarters”.

Work on the new Evija factory began in summer 2019. The interior of the new facility has been fitted on three sides with gantries which frame the build stations. These have been designed and engineered to be sleek and unobtrusive, though robust enough to carry the necessary power, data and compressed air systems required to assemble the Evija.

An overhead gantry crane, multiple vehicle lifts and a wheel alignment ramp have also been installed. The interior is illuminated by more than 30,000 of the latest high-density, low-energy LEDs. A state-of-the-art light tunnel will house the rigorous final inspection, before each Evija is driven out for track validation.

Lotus has a 2.2-mile race circuit which has, in its day, hosted testing and shake-down sessions for Formula 1 legends like Ayrton Senna, Emerson Fittipaldi and Jim Clark.

We're looking forward to seeing some amazing track times on the production models, but the CEO's claim that he's, “100% ready for some healthy competition in the emerging EV hypercar segment” sounds optimistic is Tesla gets anywhere near its claimed spec/price combination for the roadster. Could Lotus be looking to use its ‘learnings' from the Evija to make a much more affordable road-ready version to compete with Tesla?  We might find out close to 2021.

You can see part of the plant and early testing for yourself.