VW designs a robot to charge your EV autonomously

It shouldn’t come as a surprise to know that electric vehicles need to be recharged periodically to provide a driving range, but what if there was a way to replenish your EV’s batteries without having to connect the charger to your vehicle? That’s exactly what Volkswagen Group Components is trying to achieve.

The entrepreneurially business unit that sits under the Volkswagen AG arm, is trying to create a mobile charging robot that can charge an EV – for example, VW’s upcoming ID.3 hatchback. The visionary concept is aimed at EV owners who station their vehicle in a car park and don’t want to go around hunting for the nearest charge point.

The robot, which will reply on an app or vehicle-to-everything (V2X) communication, will detect where your car is parked, and will deliver a ‘mobile energy storage device’, whereby it will open your car’s charging flap and start to charge your vehicle. In principle, this should make charging your EV easier than ever before, however, you’ll still need to interact with an app to authorise the robot to come to your vehicle, and once more, have to trust it’ll be able to do the entire process on its own without any human interaction.

The benefit of having a robot operating in a car park is that it can deliver a multitude of these 25 kWh battery packs to vehicles, whereby each of them could provide up to 50 kW of charge to your vehicle. Essentially, a single robot can deliver a charge to numerous vehicles dotted around a car park; whereby drivers no longer need to go to a designated charge point. Why charge in a set location when you can have the charger come to you? That’s pretty convenient. 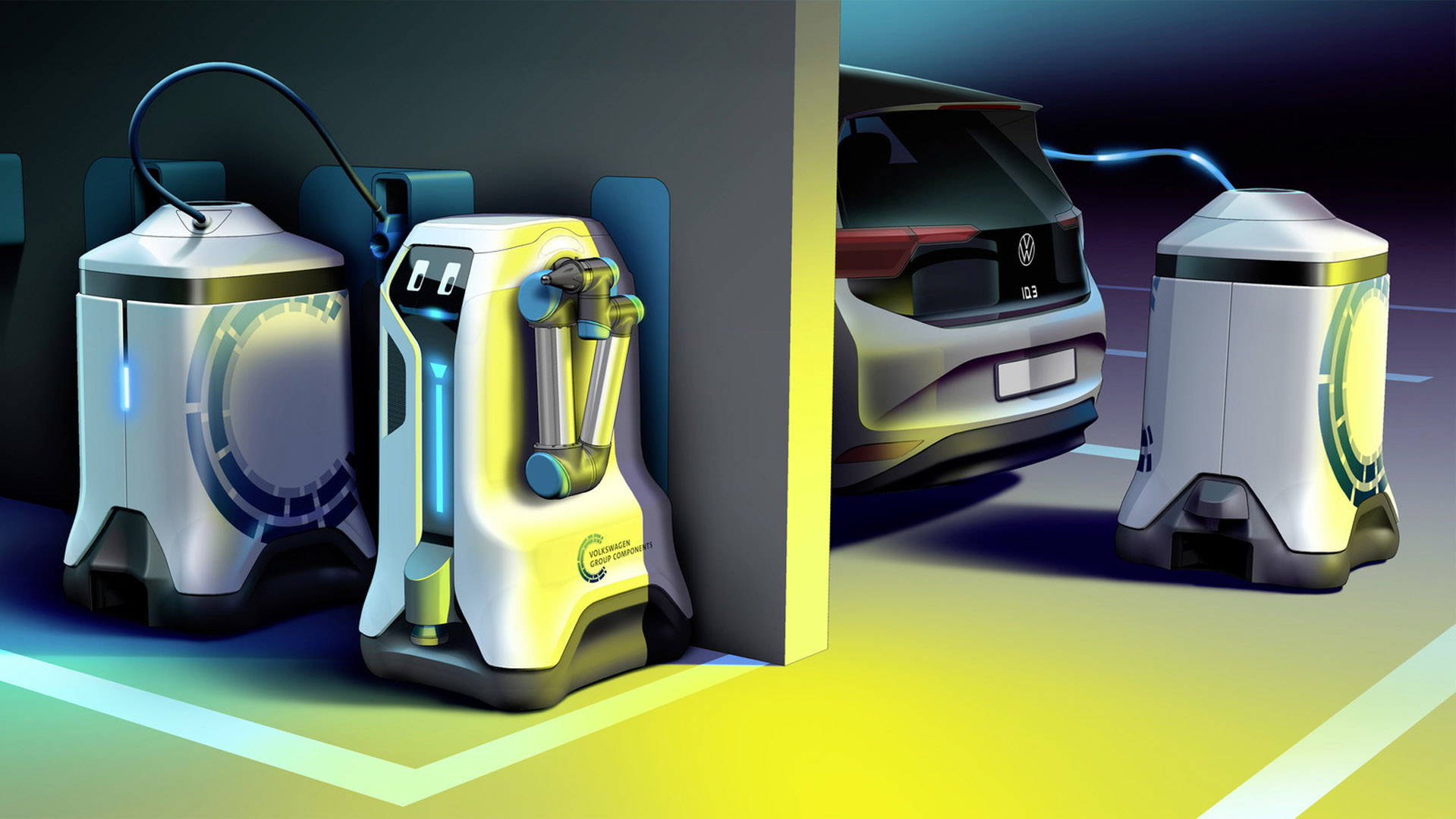 “The mobile charging robot will spark a revolution when it comes to charging in different parking facilities, such as multistorey car parks, parking spaces and underground car parks because we bring the charging infrastructure to the car and not the other way around. With this, we are making almost every car park electric, without any complex individual infrastructural measures”, summarises Mark Möller, Head of Development at Volkswagen Group Components.

However, the robot isn’t commercially out yet and is still in a concept form. There are concerns that arise with the use of robots, and I have a few of my own: if the robot bumps into your car, will you have to pay for the damages? If the robot is unseen could it create an unnecessary accident? Will the robot fit in-between parked cars, whereby it needs to deliver a charging unit and move onto the next one? If you leave your car unattended, it’ll naturally lock itself – will the robot be able to successfully couple and decouple with your vehicle without any human presence, or will you need to be there to authorise the robot to access your vehicle’s charging port? 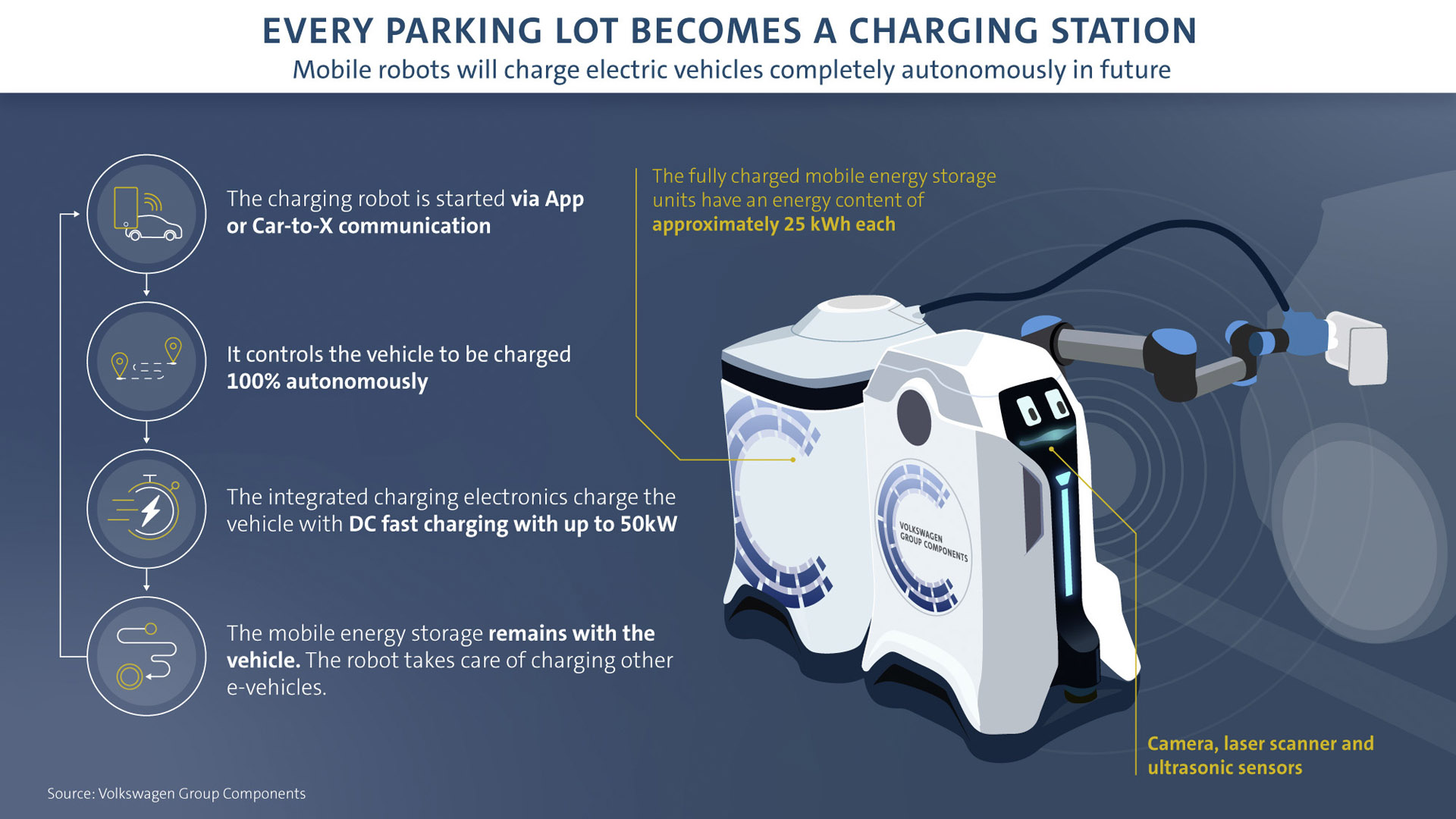 “It’s a visionary prototype, which can be made into reality quite quickly, if the general conditions are right”, Möller continues. The VW business unit claims that the robot will come fitted with ‘cameras, laser scanners and ultrasonic sensors’, which should make it safe to use in a public space. The visionary German company also state that if the car park is large enough, multiple charging robots can be employed simultaneously.

The goal here is to transform every car park into an EV charging zone – this, in turn, will encourage more drivers to switch to an all-electric vehicle. There are also benefits to operators of parking facilities, whereby the EV charging units could attract more drivers. “This approach has enormous economic potential”, says Möller. “The constructional work, as well as the costs for the assembly of the charging infrastructure, can be reduced considerably through the use of the robots.”. As this doesn’t require parking operators to install a fixed charging point; it could be seen as a futuristic trial for some companies. 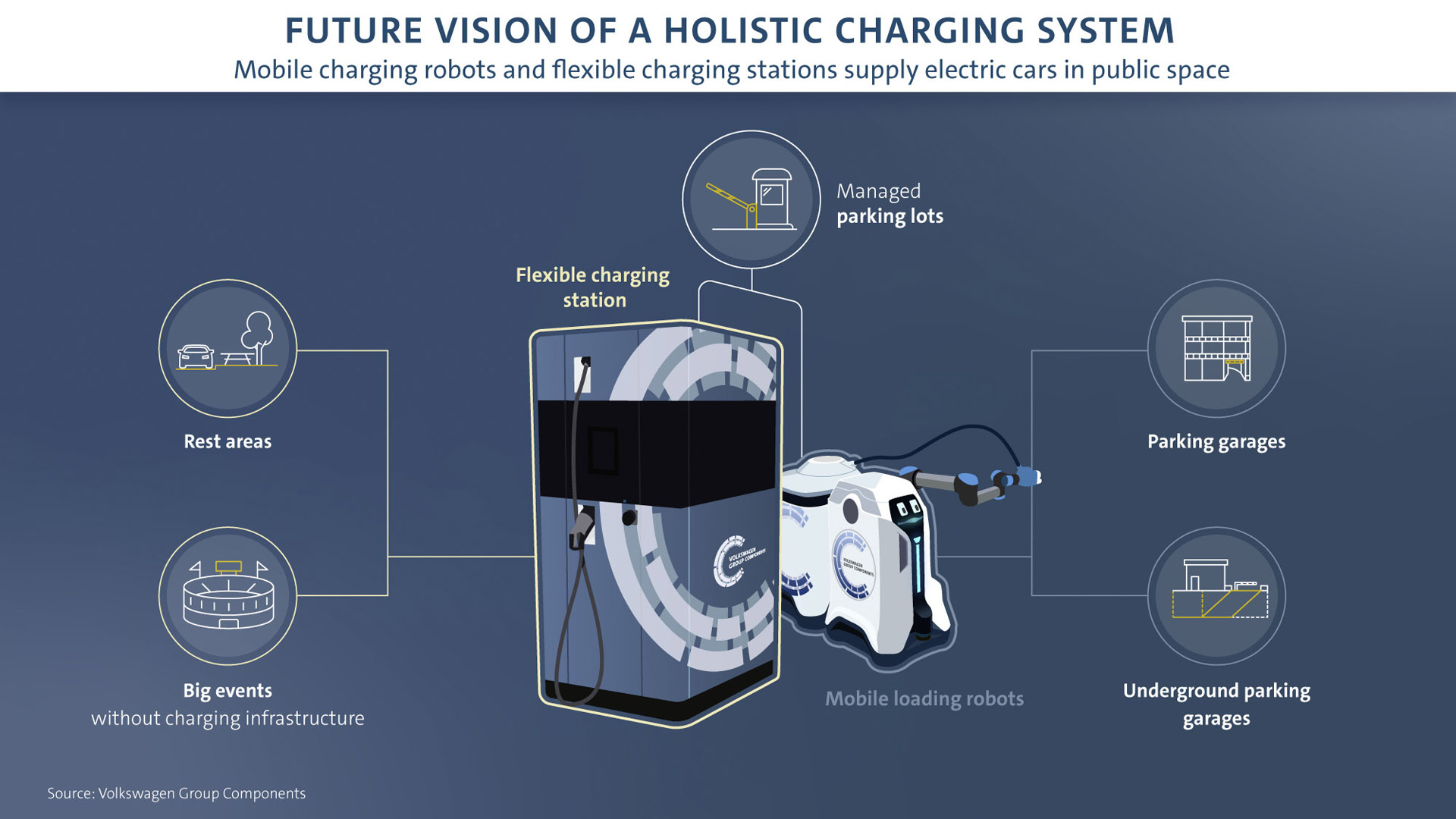 Can robots be successfully employed to speed up the transition to all-electric vehicles? I’m certainly looking forward to seeing innovative technology push the adoption of EVs forwards. What do you make of automated robots? Let us know in the comments section, below.

Christopher is an experienced editor with a strong passion for cars and technology, and reviews the latter in his spare time. He has a keen eye for detail and likes to know the ins and outs of a product. Elsewhere, he practices Taekwondo, in which he has held a black belt for several years.

What is an EV? Everything you need to know about an electric car

Canoo: A subscription-based EV that flips the industry on its head

© 2019 WhichEV. Limited - All of the independent news and expert reviews you need in one publication.