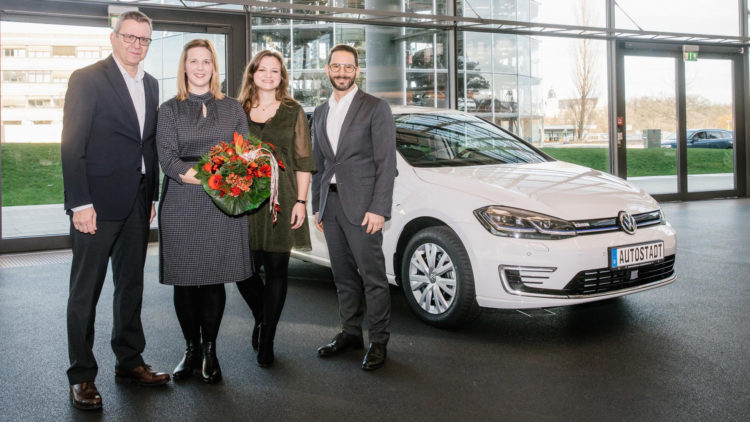 Volkswagen, the German automaker has today announced that it has delivered its 250,000th electrified vehicle. The car that marked the occasion was the VW e-Golf, which we reviewed back in December. Bought by a German customer, the all-electric vehicle is the company's most successful electrified model to date. 104,000 examples of the hatchback have been sold over the course of its lifetime (2015 to present).

The next most-successful model is the Golf GTE, which sold 51,000 units since its inception in 2014. The Passat Variant GTE (42,000) follows in third place – both vehicles are hybrids; where they have an internal combustion engine housed alongside an electric motor.

The VW e-Up comes in at number four with 21,000 units sold worldwide. The small all-electric city-based car hasn't proven to be as popular as the larger e-Golf, especially given it's been around longer (2013). VW claims that half of its customers opted for a battery-electric vehicle, while the other half chose to get a plug-in hybrid, instead.

Jürgen Stackmann, Board Member for Sales, Marketing and After Sales, says: “With the 250,000th electrified vehicle, the Volkswagen brand has reached a major milestone on the way to carbon-neutral mobility.”

“Especially all-electric vehicles such as our new ID. family are the answer to major challenges of our times. They offer considerable driving pleasure and advantages we could only dream of a few years ago. They have a carbon-neutral balance, offer more space with comparable outside dimensions, and are quiet, highly efficient, economical and inexpensive to maintain.”

While these numbers might seem impressive, 250,000 vehicles is a comparatively low amount given that in 2018 the automaker produced in excess of 11 million vehicles; that's less than 2.3%. Here, it should be considered that VW's figure also includes hybrids and not just pure electric models, such as the e-Golf (non-GTE).

“This is why we will be selling the next 250,000 electrified vehicles in a considerably shorter period of time. At Volkswagen, we are convinced that the future is electric” added Stackmann.

Given Tesla has managed to deliver over 250,000 all-electric vehicles in 2019, and took a staggering 250,000 orders in a week for its upcoming Cybertruck; there are clear signs that traditional automakers need to play catchup. While the American automaker might not have delivered 11 million vehicles, it did, in 2018, manage to manufacture over 250,000 pure electric vehicles. Both Tesla and VW have yet to announce their 2019 sales figures, though, we anticipate the former will hit around 350,000 vehicles.

A sign for growth for all automakers seems to be in China. The world's most populous country with nearly 1.4 billion habitants is proving to play a key part in these companies' successes. Gigafactory 3 is set to help shape Tesla's future, and since 2018, VW has been selling the Passat and Tiguan as plug-in hybrids, with battery-electric versions of the Bora and Lavida joining the ranks.

No matter which way you look at it, it's great to see these automakers pushing for electrified vehicles. VW's ID.3 is set to be an extremely popular hatchback among consumers; 2020 is going to be a defining year for the German manufacturer – it's finally moving away from ICE-based vehicles, albeit not entirely.

VW designs a robot to charge your EV autonomously