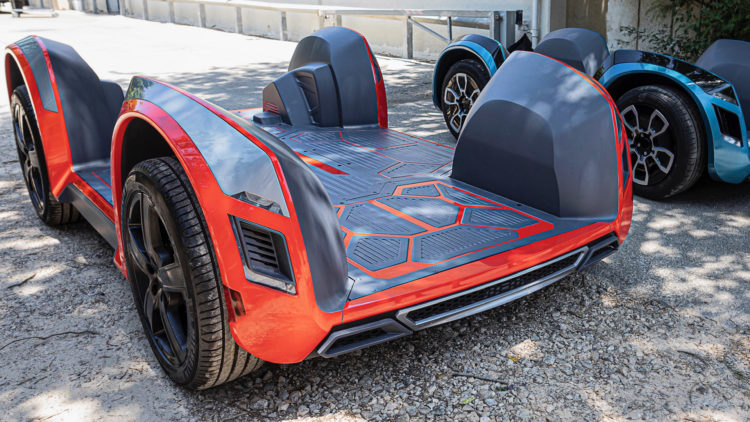 REE is an Israeli company, founded by Ahishay Sardes and Daniel Barel in 2013, in order to bring new and innovative ideas to the transport market. If you're now imagining a two-man band in a garage, think again. They have partnerships in place with companies like Mitsubishi and Honda – alongside 100 staff and they have just landed a $580m valuation as they build their finances for the next stage of the company's development. So what is the big idea that's attracted all the attention?  It's the creation of a baseline for electric vehicles, where the power/drive comes from the wheels themselves (and surrounding architecture). WhichEV puts aside any preconceived ideas on design to get a fresh look at the concept.

One of the reasons why the German auto industry is bracing itself for up to 100,000 redundancies, is the simplicity and modular nature of the EV. Every kind of product has essentials. For an electric vehicle, the fundamentals are power, steering and load carrying. If you combine the power with the steering – then you have the possibility to provide clients with a baseline solution that can then be adapted into whatever vehicle they choose. Earlier this week, we reported on British firm Equipmake and their modular power base that allows anyone to create their own buses and coaches quickly and easily. REE is appealing for that same reason.

REE describes itself as providing a ‘disruptive technology', which normally means that a company can launch a product that immediately makes a lot of other company's work/investment completely meaningless. In this instance, the ‘reveal' is an adaptive, affordable, completely flat  and modular chassis which gives you the freedom to design the vehicle you want – with multiple configurations – all from a single platform. Space, weight and complexity are all reduced to a minimum – increasing the efficiency of your own venture.

Mitsubishi is on record saying that they can see REE’s technology has huge potential in the autonomous driving world, as it makes the electrification process highly efficient with its new modular platform. Which, given Mitsubishi's slow start in the electric vehicle market, means they might be looking at REE as a way of capturing mind and market share over the next five years.

So what level of integration are we talking about?

According to Daniel Barel, “The REE platform integrates the necessary motors, steering, suspension, drivetrain, sensing, brakes and electronics into the wheel“.

In order to make this modular design system possible, Daniel and his team had to reinvent the wheel. The result? Big savings in weight and complexity when you compare the frame + engine + steering + brakes + wheels:-

You can, of course, expect that the comparison numbers quoted by REE will be favourable to their position, but a saving of anywhere near 33% will have huge knock-on benefits – particularly to range. Given that the force required to accelerate an object is directly proportional to the mass involved – a big reduction in weight could significantly increase range or the size of the load you can move.

Although still in its early days, REE already has three firm proposals on the table for vehicle design. All of them benefit from having active suspension, intelligent power management and brake by wire built into the core component (i.e. the base). The designs are:-

“What we have been working on has the potential to, literally, change the entire industry”, Daniel Barel recently told a conference. “This is something enormous. We have reinvented the wheel”.

Want to know more?  Watch the initial promo video for yourself.

Barriers to entry have kept prices high and innovation to a minimum with traditional car makers. There's a good chance that we're about to enter an era where the car (in all of its forms) is truly commoditised. While the first 10 years of the EV industry were marked by largescale new companies looking to rival the major brands in the high end of the sector – we're now looking at the distinct possibility of low-cost, clean, safe, quiet transport for all. That has to be a good thing, right?