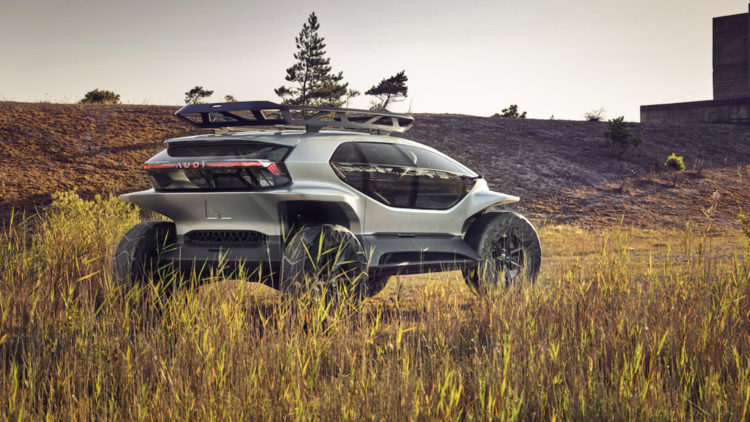 Watching the Cybertruck being revealed on stage was one of the most surprising ‘TV moments' of 2019. No one knew quite what to expect and the angular design immediately had a ‘Marmite effect' on the audience: You either love it or you hate it. Oliver Keyerleber, for sure, must have swallowed hard when he saw Tesla's design. As Design Project Manager for Concept Cars division, he had been working on the Audi AI:Trail for quite some time, but was nowhere near taking orders. WhichEV ponders whether Elon Musk's imagination has done the folks at Audi a huge favour.

While Audi's main range is far from exotic, the company has historically managed to grab consumers' attention plenty of times. Those of a certain age will remember with glee, the sight of Hannu Mikkola or Stig Blomqvist powering their way to a World Rally Championship in the original Audi Quattro.

Then there was the gorgeous Audi RSQ from the I, Robot film. It's fibreglass over aluminium frame looked every bit like a glimpse into the future – including the idea that it would be unusual for a robot to take the controls.

The challenge with any car that's seriously innovative, is (a) can you make it for a sensible price, (b) can the public see themselves driving it and (c) can they connect with the idea of placing an order for it?

Here's what sets the AI:Trail aside and how the release of the Cybertruck might instigate the directors at Audi to release an outlandish vehicle.

Extreme design with unusual angles
The Cybertruck has proven that people will place orders for something extreme.

Wheels that would look at home on a lunar lander
Ditto. Both the Audi and Tesla have some of the most unusual wheels you're ever likely to see.

Multiple electric engines and devastating performance
Audi is planning to include four electric motors, which combine to give 320kW of power and a torque of up to 1,000nm. From what Musk has said, the triple-engined Cybertruck has been the best selling model. Tesla also claims a 0-60mph in under 3 seconds for that model.

Autonomous driving capabilities
Tesla has already established its credentials in this area and you'd have to imagine that Audi will have plenty of money to invest in robotics and Ai after sacking 10,000 workers to improve cashflow into R&D.

The similarities are there, but where's the help we mentioned earlier?

According to our latest research and calculations, it seems that Tesla has taken way over 250,000 advanced orders for the Cybertruck – with an estimated potential revenue boost of almost $14 billion. Sure, some early orders may be cancelled later, but then again other customers could also place more orders.

Whichever way you look at it, Tesla has given Audi some of the best market research possible: they have proven that there is a market for radical-looking electric cars with some serious grunt. For Audi, in its current state, that information will feel invaluable. Ironically, Audi's headlight system for the AI:Trail involves a group of highly illuminate drones called pathfinders.

We love (most) concept cars and it would be great to see some more EV diversity on tomorrow's streets.

Note: Image of the Audi Quattro courtesy of Mic from Berkshire