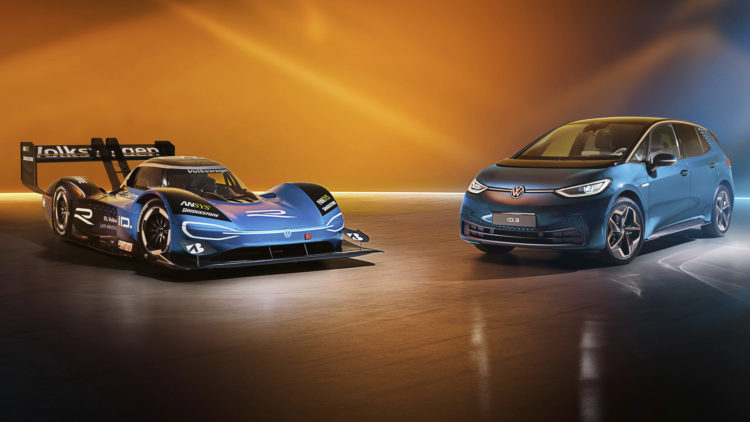 On the 3rd of June 2019 the Volkswagen ID.R broke the electric vehicle lap record at the Nürburgring with a time of 6:05.336. It also broke the record for the hill climb at the Goodwood Festival of Speed. This monster of a car is less than 39″ high, delivers over 670 horsepower and has a carbon monocoque with steel roll cage. At the Essen Motor Show on 30th November, it will be side-by-side with an ID.3 from VW. While they may look stunningly different from each other, there share more than a little DNA. WhichEV looks for the genetic fingerprints.

Welsch has deliberately cultivated a technology sharing environment for the ID.3 and ID.R teams.

“Motorsport benefited from the production development know-how in building battery cells and handling high-voltage components in the vehicle“, said Welsh. “On the other hand, the production car developers watched how the motorsport team dealt with rapid charging technology and the strategy it used to optimise energy deployment and recuperation while driving”.

One of the most famous Japanese maxims is Seiryoku-Zenyo, which literally means ‘Maximum efficient use of energy'. That's certainly something which VW seems to have taken to heart. With the ID.R, the efficiency is focused on delivering the highest possible power, through the drive train and tyres, onto the tarmac – in order to maximise acceleration and speed. For the ID.3, the efficiencies are more to do with range extension.

That said, they both need to charge as quickly as possible and recover as much energy as they can from braking. Positioning heavy components like batteries as low as possible, creates a better centre of gravity in both vehicles – improving handling and stability.

Aerodynamics are also important for both the ID.R and ID.3 – given that a lower coefficient of drag will help performance and battery life. It also reduces noise levels, but that's hardly a consideration with a racing car!

VW's engineers have been experimenting with wheel sizes and tyre profiles for the ID.3. The 20″ alloys selected are as flat as practicable. That helps with the aesthetics, while at the same time improving aerodynamic efficiency.

Standing an exceptional sports car next to a more mundane passenger vehicle is a tried and trusted technique in the world of car sales. It brings the eyes, starts conversations and gets people speculating. The ID.R is absolutely gorgeous and we don't mind VW using it to turn our heads toward the ID.3.

VW has been banging in the positive news stories recently and this announcement comes hot on the heels of the sale of its 100,000th electric Golf.

You can find out more about the Essen Motor Show here.