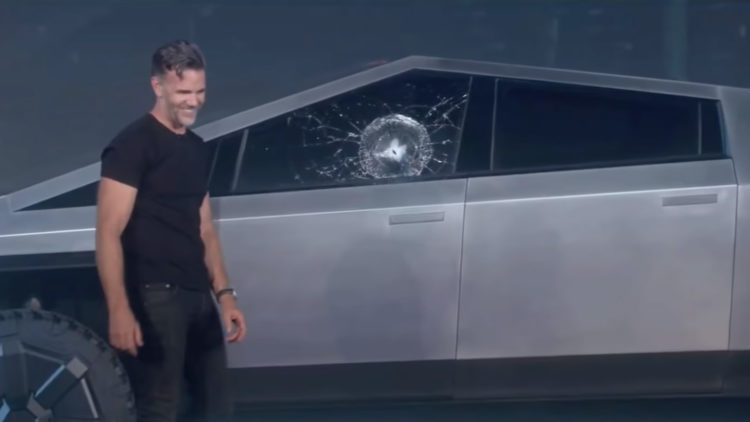 The Tesla Cybertruck has been doing the rounds across every media outlet around the world, including at WhichEV. Hate it or love it, the vehicle has now managed to secure over 250,000 orders in under a week. But there's one major blunder that didn't go unnoticed: the catastrophic failure of the Tesla Armor Glass during the live presentation. Covered by many as a major flaw and labelled as “Tesla's demise”, Elon Musk, CEO and co-founder of Tesla has spoken about the issue on Twitter.

During the presentation, Musk invited Franz, a Tesla employee, to hit the vehicle's door with a sledgehammer. He hit the pickup truck twice. This in-turn, cracked the base of the glass within the door's frame, weakening it.

Yup. Sledgehammer impact on door cracked base of glass, which is why steel ball didn’t bounce off. Should have done steel ball on window, *then* sledgehammer the door. Next time …

Below, you'll see a demonstration of the metal ball bouncing off the vehicle's glass – an impressive feat given that most vehicles' glasses won't survive the test.

Franz throws steel ball at Cybertruck window right before launch. Guess we have some improvements to make before production haha. pic.twitter.com/eB0o4tlPoz

Elsewhere, Musk revealed that the rear tonneau cover will feature a solar panel. The additional option would generate 15 miles of driving range, where the average US citizen (according to Musk) does around 30 miles a day. If the billionaire had it his way, he'd ideally want “fold out solar wings that would generate 30 to 40 miles per day” – we're not sure about that, Elon. We don't think consumers want a Mars Rover on the roads.

Despite all of the kerfuffle that ensued after the launch of the Cybertruck, it would seem the pickup truck has superseding expectations.