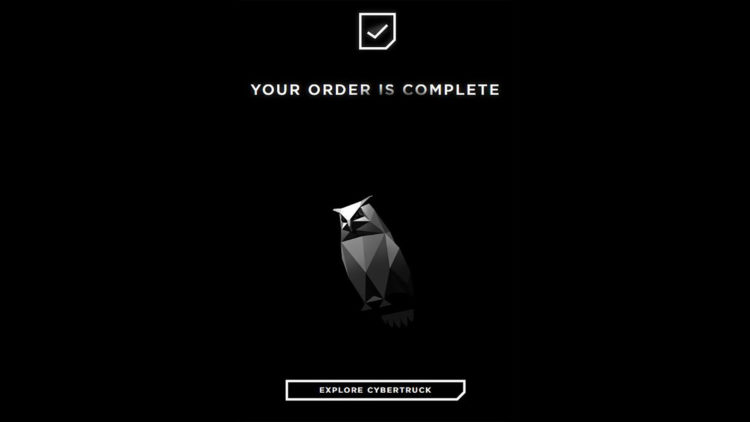 Since its announcement, the Tesla Cybertruck has gathered a lot of interest; from Tesla devotees to pickup truck lovers, most seem to have taken to the vehicle's radical design. On paper, the Cybertruck has it all, but there are a few things you should consider before buying one, especially if you live in the UK.

Here are WhichEV's Considerations before throwing a £100/$100 deposit on the new Tesla pickup truck.

The pickup truck's striking LED headlights and taillights look incredible at the dead of night. The unique-looking line that spans across the front and rear of the vehicle, respectively, is different from what most other manufacturers are doing right now – they're either using two separate linear matrix systems or reverting to a more traditional approach whereby the enclosures are rounded.

However, when we asked Tesla how would one go around changing a lightbulb, a sales representative couldn't answer the question, instead said: “that's a very valid question and unfortunately, I've not got any information to share with you”. 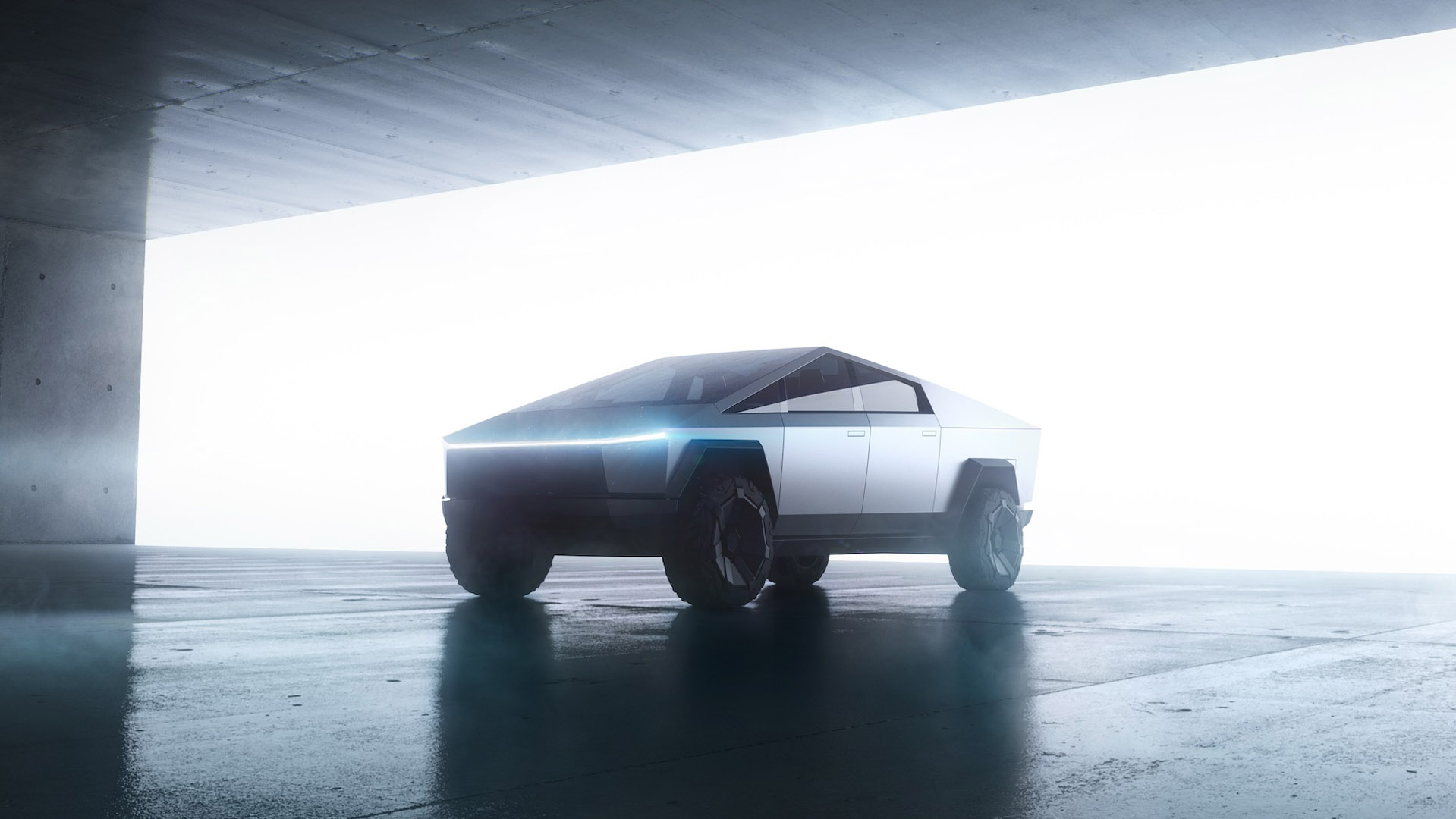 This might seem trivial to some, but if they're made out of singular LED strip, we're not entirely sure how a user can change it on their own. Instead, they'll need to visit a Tesla dealership, whereby they'll replace the entire unit or have to tinker with the frunk to change the LED.

If, however, if there are a small number of high-emitting diodes lined across the front bumper, one could access these points with ease. In order for that to become a reality, Tesla will have had to design a specific LED matrix system that uniformly refracts light.

Originally, it was thought that the pickup truck would be available in a stainless steel colour, only. However, it has since been revealed that the Cybertruck will also come in a black colour scheme, too. We've yet to see how this will look, but we're hoping for a Batmobile-type of look – matte black, please.

Worth considering if you're unconvinced about the vehicle's striking design; the all-black colour scheme might help you blend into the environment a little more…especially if you hide in the shadows – like Batman!

We posted our in-depth guide of the new Tesla pickup truck over on our Facebook page and found a comment that resonated strongly with us – a Facebook user said: “Doubt it'll pass Eurocap! That front end will cut a pedestrian in half.” A valid point, indeed.

Over the years, Tesla has built up a strong reputation in safety; from the 2014 Model S to the 2019 Model 3 both vehicles received the 5-star Euro NCAP rating, an impressive feat. But, how will the Cybertruck fair in comparison?

Well, we're certainly not safety specialists, but the vehicle's rigid 30X cold-rolled stainless steel material construction combined with a high ground clearance might prove to be the company's undoing. We can't imagine how an impact from this vehicle will affect an adult being hit by it, let alone a child.

Until we officially hear from Tesla, we can only speculate that this vehicle won't be safe for pedestrians crossing the road, whilst, it'll be like sitting in an armoured tank inside the cabin.

For reference, the last tested pickup truck on Euro NCAP's website was the Mercedes-Benz X-Class. It scored 5/5 in November 2017.

The Ford F-150, which was largely used as a benchmark by Elon Musk during the entirety of his presentation, is a large-sized pickup truck. The Tesla Cybertruck, however, takes things one step further. Here are some figures:

The numbers above might seem to indicate that the F-150 is still the bigger vehicle, but it's not until you put them side-by-side where you see the Cybertruck almost dwarfs the Ford pickup – see for yourself from the video, below:

Why should you care? Well, if you're living in Europe (and that currently includes the UK), you'll be concerned by the amount of space required to drive and park the thing. It's an absolute unit, which is great on large-sized freeways in the US but throw it on the tight streets of London and it'll be like driving an HGV.

We don't anticipate Londoners to be purchasing the vehicle as it simply isn't viable, but even if you live outside the capital city, country roads here in Europe are narrow – you don't see many large trucks driving along them, and for good reason; they don't fit.

Truthfully, we're a little annoyed by Tesla's wording. On the company's website, it's indicated that Tesla Autopilot comes as standard, when in reality, it's a £5,800 option.

Yes, we understand this is the case with every other Tesla model out there already, but the wording here suggests that the rather expensive option comes fitted out-the-box. When we questioned Tesla, the response was: “all Cybertrucks will come with the hardware ‘as standard', however, the software that requires to run it will require you to pay the £5,800 to unlock it”. Frustrating.

Let's face it, if you live in Europe, namely in the UK, Autopilot is somewhat pointless. Don't take our word for it, a Tesla sales rep told us the same: “unless you drive on motorways the whole time, autopilot is nowhere near as useful as it is in the US”. 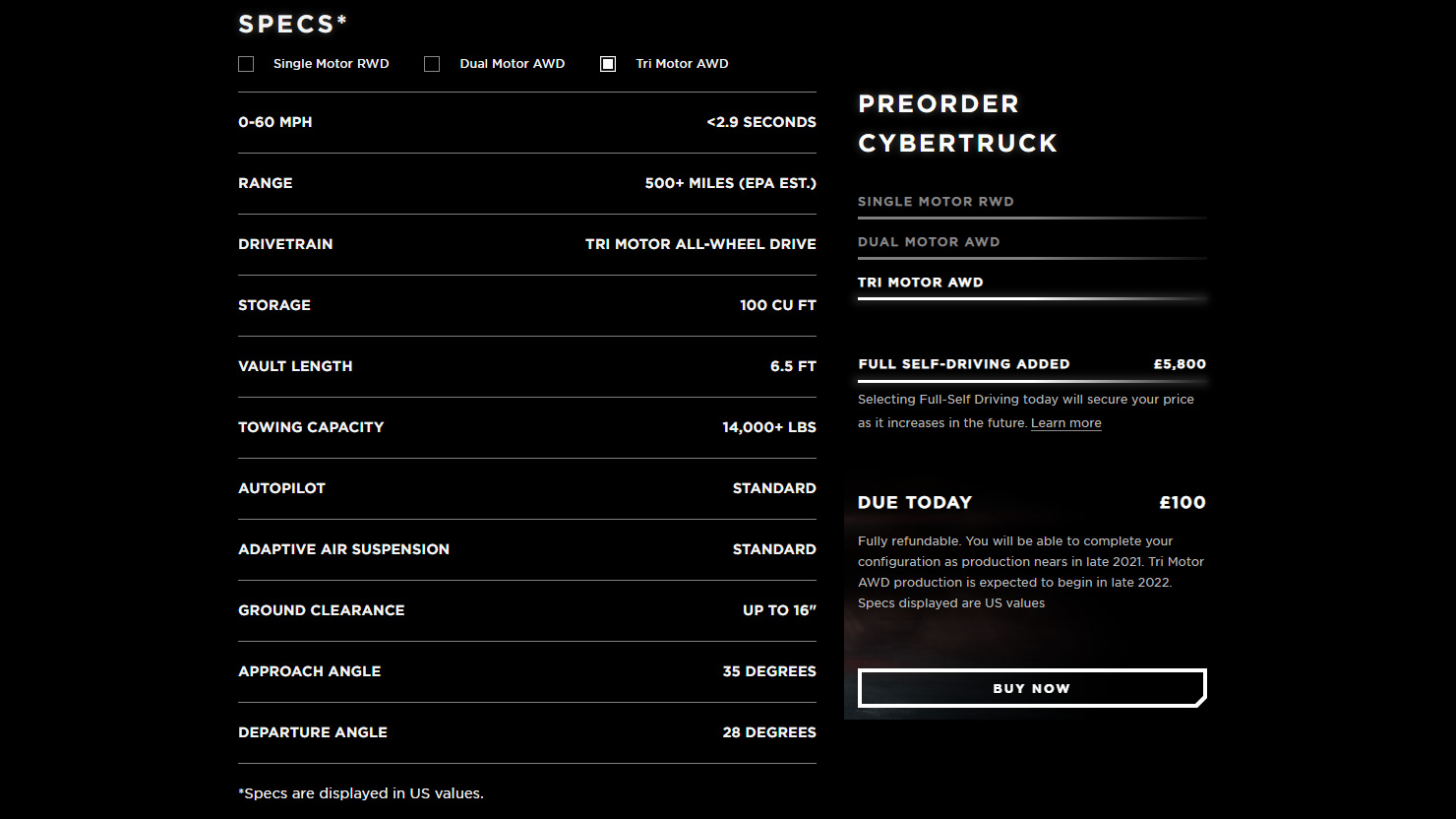 An odd one, we know, however, we're baffled to think where your reusable mugs/cups will reside once you sit inside the cabin. From what we've seen there are no cup holders in sight; that's due to the centre console being replaced by an additional seat, while the whole dashboard has a stainless steel/marble-like finish with no obvious cup holder arm. That coffee, tea or hot chocolate might have to wait. 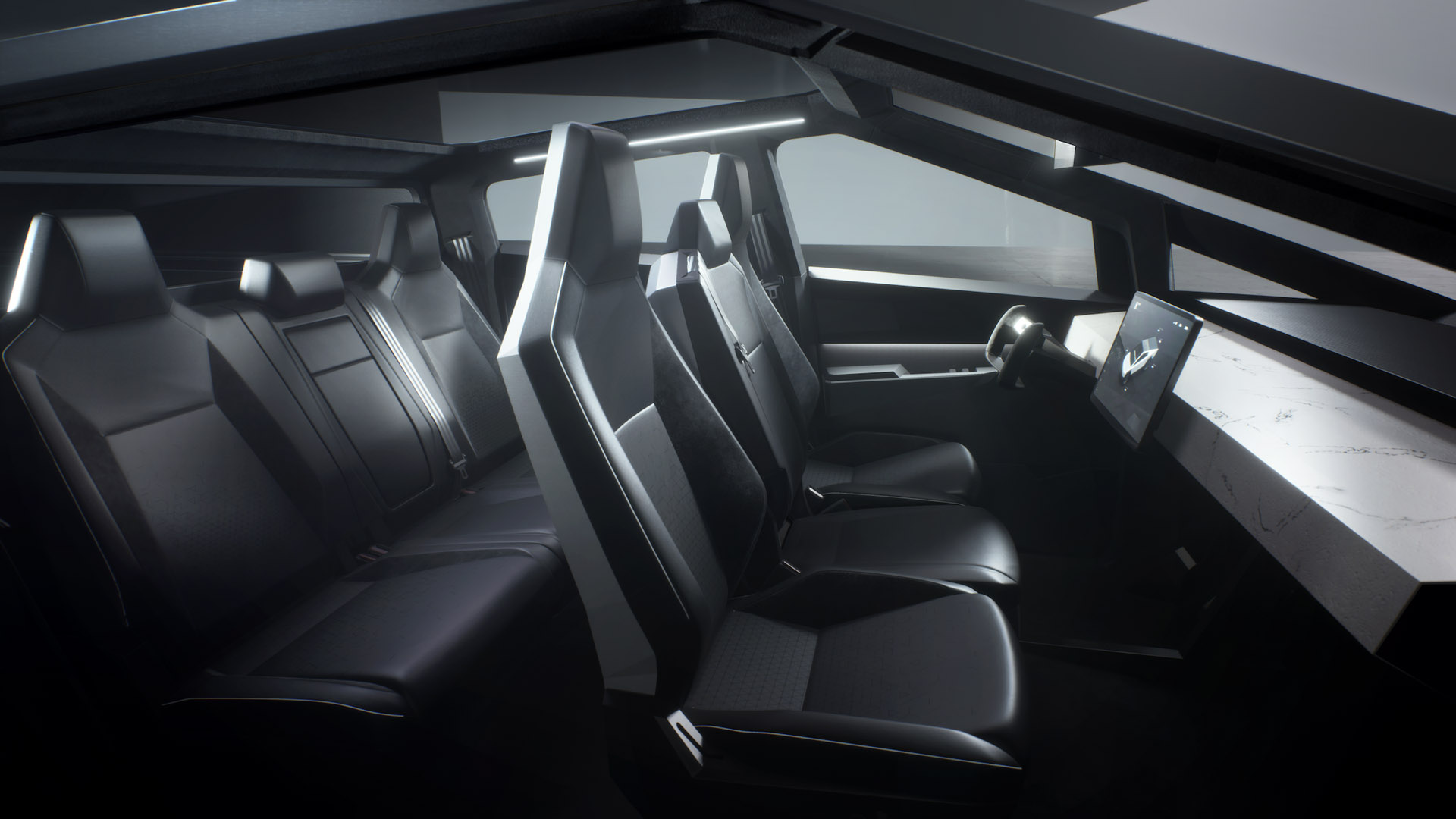 By the time the vehicle hits the UK, it'll most likely be in 2021, while in the US it'll be in late 2020. This means that by the time the pickup truck launches, the £3,500 plug-in grant could be reduced or be scrapped entirely.

This applies to all the upcoming vehicles, but namely ones such as the Cybertruck where you can't pay for it up-front or set up a monthly direct debit; as such, it's worth considering that by the time the vehicle comes out it might cost you more than you think.