VW begins to curb its environmental pollution at sea 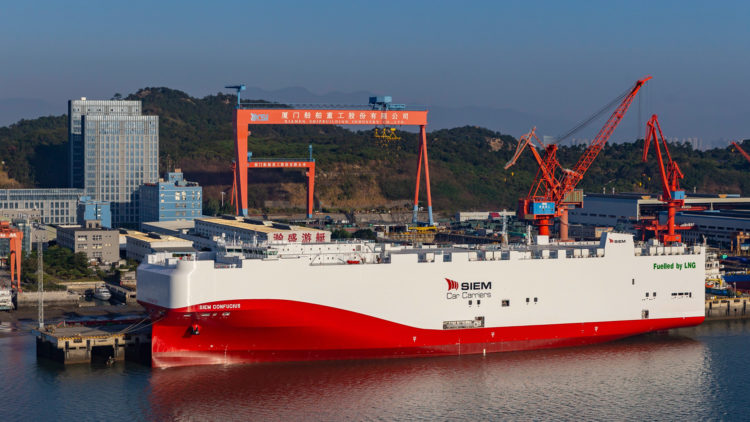 Getting consumers used to the idea of driving electric vehicles came first. With EVs getting better and more affordable every day – that ‘path’ to the future has already been laid. Commercial road vehicles will follow close behind, especially as the various emissions regulations start to bite. That still leaves a huge pollution problem with the global transportation of goods. WhichEV takes a look at the work being done by Volkswagen Group Logistics and others.

Xiamen is a port city, on the Chinese mainland, almost directly opposite Taiwan. It was from this location that a pair of next-gen freight ships have just been launched. Named Aristotle and Confucius they are expected to be the first of a new series of carriers with much more attractive environmental credentials.

Powered by liquified natural gas, they were built by Siem Car Carriers AS, specifically for Volkswagen Group Logistics (VGL). Each has the capacity to carry almost 5,000 cars across major oceans. They will begin on routes between the USA and Europe.

So just how clean are these new ships?

The biggest drop is in the production of sulphur oxides, which have been all but eliminated. Soot (impure carbon particles) is down by almost 60% and nitrogen oxides are down by 30%. Carbon dioxide has been cut by a quarter.

Overall pollution creation is nowhere the levels you would achieve with an electrical solution, but when you consider that these vessels are generally running 24/7 throughout the year, the small savings will quickly start to rack up.

VGL uses 11 large scale car carriers every day, so the introduction of the first two ‘clean’ ships will make an impact and we can only hope that Volkswagen has budgeted for a fleet-replacement.

Thomas Zernechel, Head of VGL, said that the move to LNG seaborne transport was vital: “We are entering a new field here to reduce emissions. These ships are the first overseas car freighters in the world to be LNG-powered. In addition to the increasing use of LNG trucks, conversion of our many rail transports to green electricity and the use of biofuel in the short sea segment, the two new LNG ships represent an important building block for our strategic goal of climate-neutral logistics”.

He went on to say, “we believe that the switch to Liquified Natural Gas (LNG) as marine fuel is the most important basis for a maritime energy revolution,” said Uwe Lauber, CEO MAN Energy Solutions. “In a second step, gas-capable ships can be operated with synthetically produced, climate-neutral fuels and are therefore future-proof. With this project, Volkswagen is pioneering the decarbonisation of global trade flows”.

With a top speed of almost 32km/h Aristotle and Confucius are described as ‘advanced’, with the capacity to carry a mixed load of up to 7,500 cars each. They are both 200 metres long, 38 metres wide with 14 car decks and state-of-the-art navigation. When we saw that the ships use a 12,600kw engine, it did make us wonder: would there be a possibility of electrifying cargo ships in the future?

Let us know your thoughts in the comments section, below.