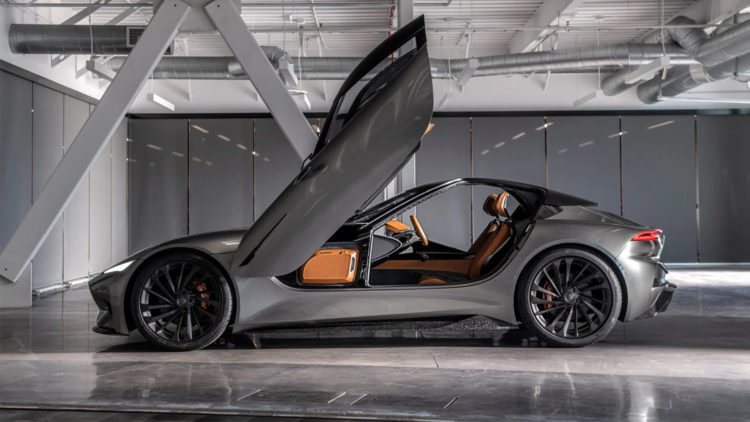 Danish-born Henrik Fisker, was the man responsible for the design of Aston Martin's DB8 and Vantage cars as well as BMW's Z8. When he started Fisker Automotive in California, back in 2007, there was every chance that the world would be seeing a stream of amazing new cars.

However, events conspired in such a way that the company was not able to hit commercial success in time and it filed for bankruptcy in 2014. Liang Zhou, CEO of Chinese auto supply company Wanxiang, believed in the company and its technologies – so agreed to buy the assets for just under $150m and Karma Automotive was born. WhichEV takes a look at Karma's latest offering, the Rivero SC2 concept car.

Earlier this week, we reported on the Pininfarina Battista, a 1,900 horsepower monster that can hit 60mph in under 2 seconds. The Karma SC2 offers similar performance characteristics, but ‘only' has 1,100 horsepower in its electric powertrain.

While the Karma SC2 doesn't come with an on-track session with Nick Heidfeld (as offered by Pininfarna), it certainly appears to live up to its billing as a ‘hinge-winged hypercar'.

While Fisker is undoubtedly a maser of cutting-edge design, Zhou has in-depth knowledge of the back-end supply chain and the modular nature of electric vehicle construction. Asked about the practicality of the Karma SC2, Zhou was clear about his intentions.

“This is a signpost to our company's future as a technology-driven brand”, he explained. “Our open platform serves as a test bed for new technologies and partnerships, where we are to provide engineering, design, technology and customisation resources for others”.

Mounting a pair of electric engines at the front and rear, means that this car offers 800kW of power, enough to simultaneously boil 400 kettles in homes across a small village. Shaped like a ‘capital I', the 120kWh battery sits between the driver and the dashboard.

Creature comforts are kept to a minimum, but the driver-assistance is certainly futuristic – with long-range radar and LIDAR sensor systems alongside carbon/ceramic brakes, torque vectoring gearbox and, of course, racing suspension.

The sad part about the Karma SC2 is that it is unlikely to be built/shipped to customers as a ‘retail product'. Instead, Zhou is developing the various concepts and technologies to be ‘appealing to other car brands'. In that sense, Zhou is orienting his company in the opposite direction to Pininfarina.

Having just laid off 200 staff from its Irving operation, Wanxiang is making the tough choices being faced by a lot of automotive companies at the end of 2019.

The dreamer inside all of us, wants companies like Karma to succeed and for the road to be populated with little gems like the SC2. While most of us will start driving with an ‘affordable little runner', our spirits are only truly lifted when we see an inspirational new supercar.

More power to the dreamers.

Can Mercedes-Benz sack its way to success in the EV market?