In early 2018, Ford announced it will be revealing a new all-electric vehicle. Fast-forward to 2019, and the American manufacturer has unveiled its crossover SUV, the Mustang Mach-E. The vehicle follows on from an $11 billion push by the manufacturer to electrify its fleet – Ford plans to have 40 electric vehicles by 2022, where one of its most likened vehicles – the F-150 truck – will be, in-part if not entirely, electric.

In this article, we'll share everything we know about the all-electric Mustang-inspired SUV.

Read next: Everything you need to know on the Volvo XC40 Recharge

Ford Mustang Mach-E: A history of its name

Initially, the crossover SUV was coined to share the name of the 1969 Ford Mustang Mach 1 – a sporty-looking two-door sports car that was designed to attract a younger audience; in its years of production, it did just that. To follow on from this notion, Ford envisaged reinvigorating the car's iconic name for its new electric vehicle. Unfortunately, this was met with a backlash from Ford Mustang devotees. As a result, there's been no mention of the name ever since.

On 14 November, Ford revealed its all-electric vehicle will be called the Ford Mustang Mach-E. It matches what we expected it to be called, as it takes on a small twist on the Mach 1, and aligns it with Ford's Mustang brand. 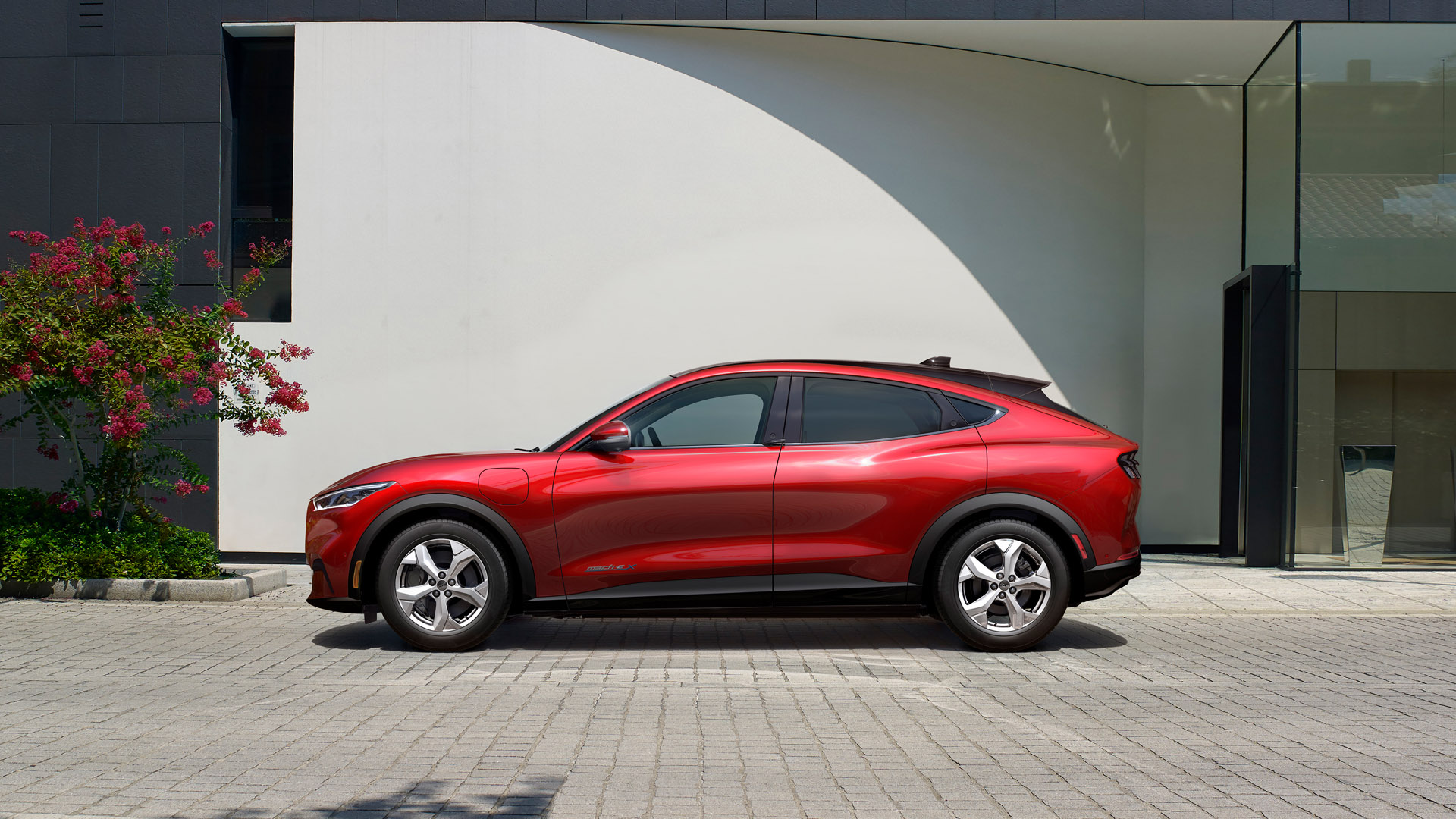 From the front, the Mustang Mach-E resembles the petrol-led Ford Mustang 2020; from its aggressive-looking headlights to its raised front wings and bonnet. Unlike the non-electric variant, the Mach-E has its front grille replaced with a solid plastic placard that houses a few of the car's sensors. The redesigned Mustang pony logo sits here, too.

To the side, the Mach-E is a crossover of the Ford Escape SUV and the petrol Mustang 2020. The wheel arches and windows are like the former, while the rims look like the latter; the Mach-E is available with 5 Spoke 18″ or 5 Double Spoke 19″ alloy wheels.

Around the back, the crossover SUV yet again looks much-like its petrol-led siblings. The rear window, bumper design and its curvy figure look much like the Ford Escape and Edge SUVs, whereas the taillights and Mustang logo resemble the petrol Mustang 2020.

As you might expect from an all-electric vehicle, there's no exhaust and the vehicle's charging flap is located on top of the driver's side front wheel arch – at least, that's the case with the US variant. 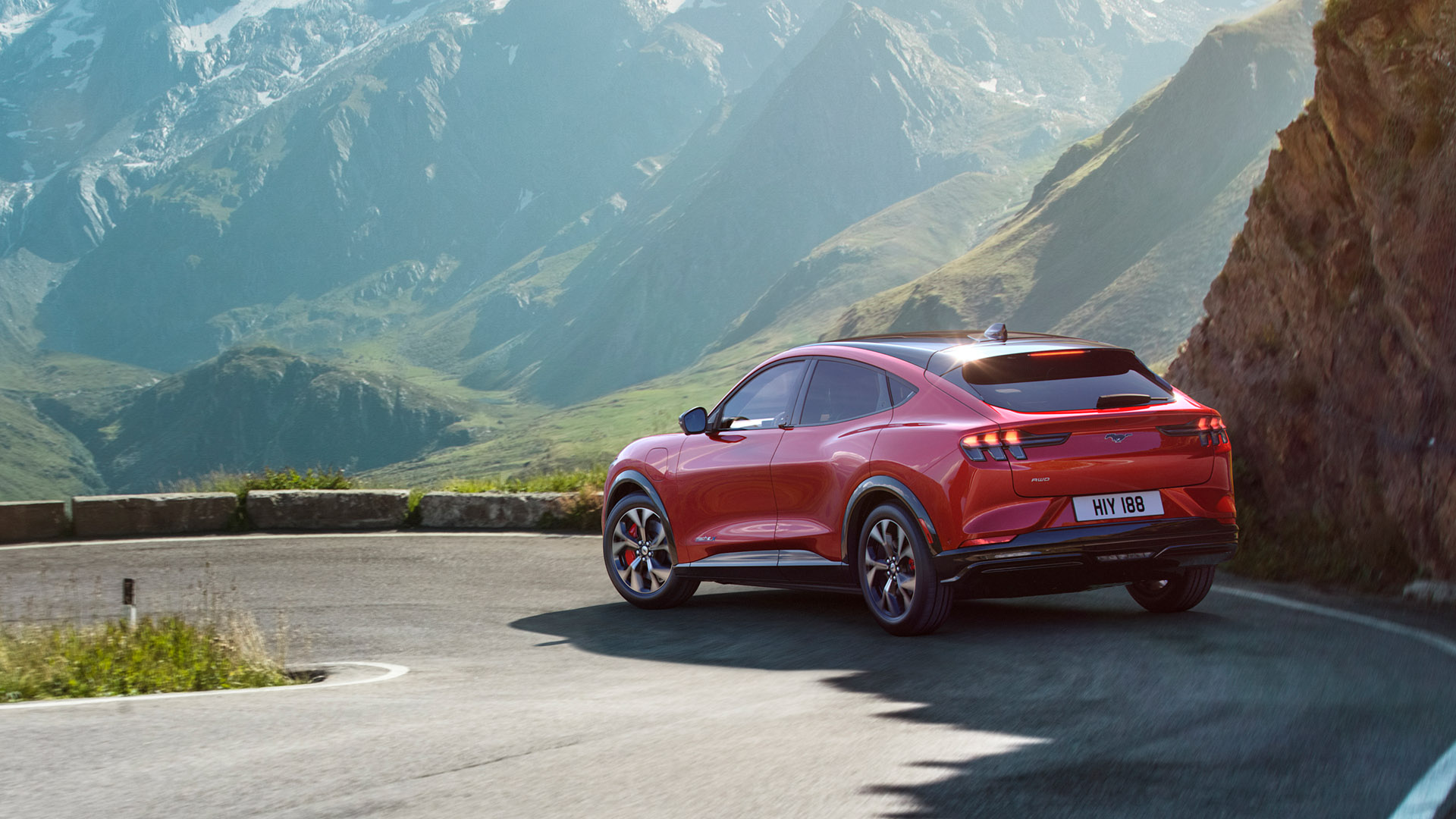 The SUV sits five adults, where the rear boot offers 402 litres of space – with the seats down, this figure goes up to 1,420 litres. At the top, there's a panoramic fixed-glass roof which has a special coating with infrared protection to help the interior of the cabin stay cooler in the summer and warmer in the winter.

As for the design of the cabin, Ford has kept things simple: there's red stitching on the AWD model, while the RWD model is limited to an all-black look, instead. The ‘First Edition' models come with the option of having either a red or blue trim.

The vehicle's centre console has an electronic gear selector, two cup holders, and two USB ports (Type-A and Type-C) to charge your phone, tablet or laptop. You can also wirelessly sync your smartphone to the vehicle's infotainment system through Apple CarPlay, Android Auto and AppLink. 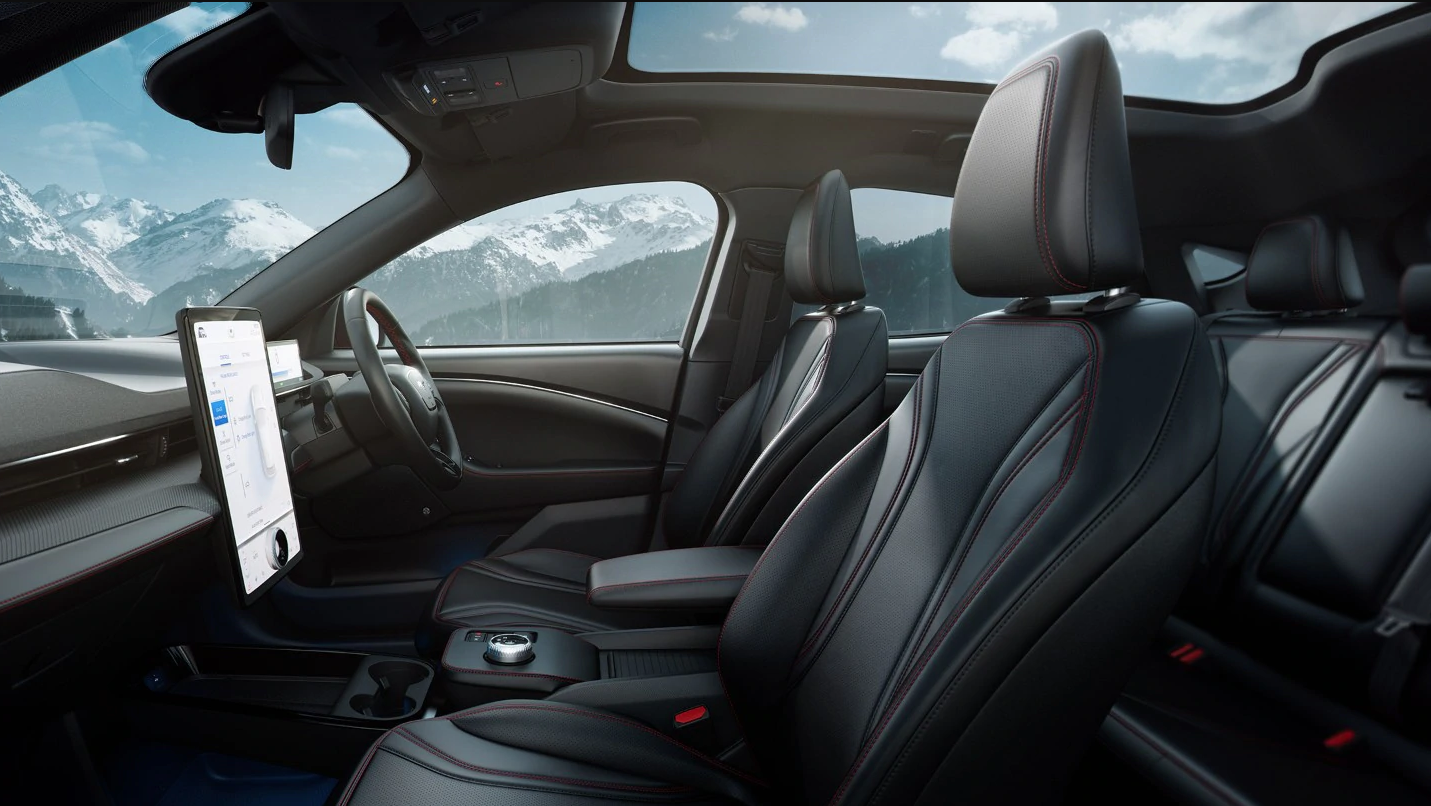 A large 15.5″ touchscreen display takes centre stage on the SUV's dashboard; a physical rotary dial sits near the bottom of the display so that you can adjust the volume with ease. As you might imagine, Ford has done away with a lot of physical buttons, instead, opting to use the Mach-E to showcase its next-gen Sync system. Here, you'll be able to tweak the vehicle's climate controls, unlock doors, choose between driving modes, navigate and use it to view your media, among other things.

Much like others out there, the Mach-E's infotainment system will be able to take over-the-air updates to improve on functionality and services.

Moving onto the steering wheel, the automaker has kept numerous physical buttons, including media controls. By the driver side door, there are physical buttons for the four windows and side mirror adjustments.

Elsewhere, a B&O sound system comes fitted as standard so expect better-than-average sound quality. In the past, we've found B&O systems deliver a lively, exciting sound signature – we hope it's the same on the new Mustang.

Finally, to get into the vehicle, Ford opts for a ‘Phone As A Key' method. Using Bluetooth, the vehicle can detect when you're near it, whereby it'll unlock and enable you to start driving without having the need to use a key or fob. If you happen to lose your phone or forget it, there's a keypad on the B-pillar that allows you to unlock the vehicle, whilst a separate code is required to be entered on the centre touchscreen display to start and drive the SUV. 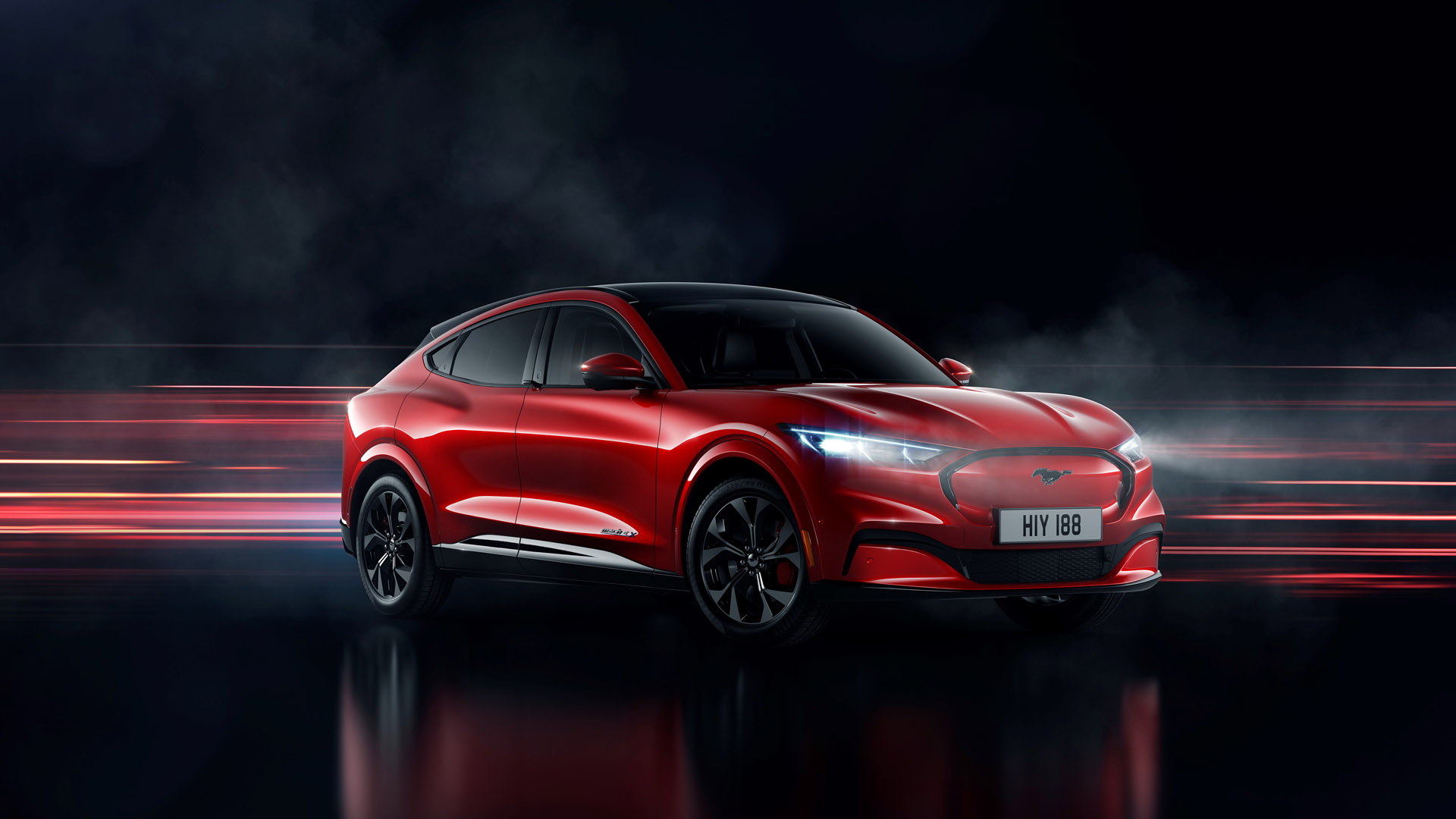 As for performance, the Mach-E is available in four different configurations:

Oddly, Ford sent out a press release quoting the Mach-E is “targeting 0-62 mph in less than five seconds and an estimated 465PS (342kW) and 830Nm of torque”. These higher quoted figures, however, relate to the upcoming Mustang Mach-E GT, which tipped to launch sometime in 2021.

“Whether you want to really feel its performance capability or are looking for the quiet experience that electric vehicles can offer, the Mustang Mach-E harnesses the power of electrification to create a unique driving experience while retaining that unmistakable Mustang feeling of freedom,” said Ted Cannis, Ford enterprise product line director, global electrification. 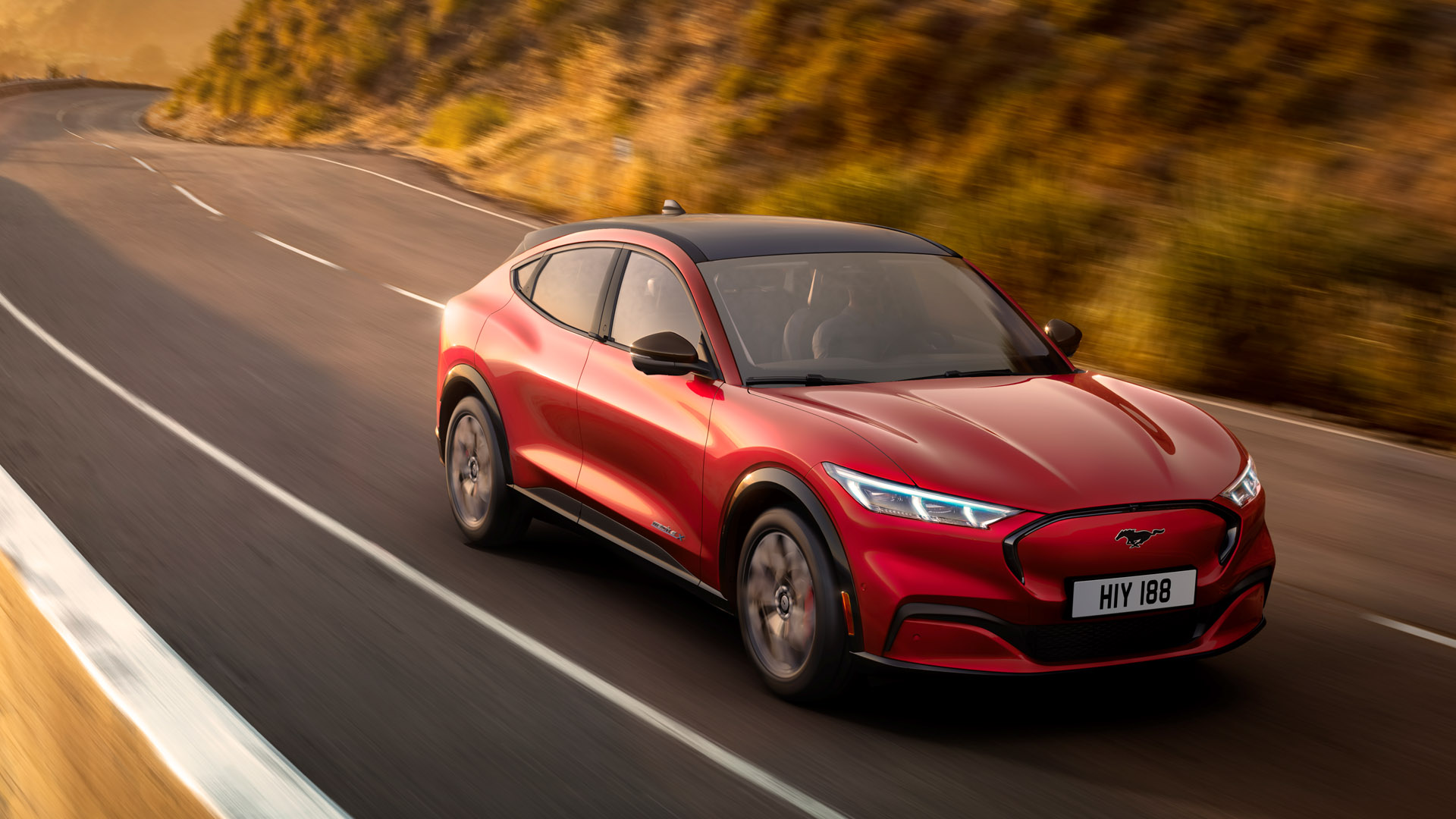 Aside from the vehicle's raw specs, le pièce de résistance comes from its ability to accept a 150kW ultra-rapid charge. This means the Extended Range models can get 57 miles of driving range with a short 10-minute charge, while the standard range Mustang Mach-E will charge from 10% to 80% in approximately 38 minutes.

Ford is a founding member and shareholder of the Ionity consortium, where the manufacturer has come together with other automakers to build 400 high-power-charging stations across key locations in Europe by the end of 2020.

Read next: Everything you need to know on Tesla’s SUV

The price of Mach-E crossover SUV starts from £40,270 and a fully spec'd out Extended Range AWD model can be yours for £58,000. The Mach-E can be pre-ordered from Ford's website, with deliveries expected by the end of the year. The Ford Mustang Mach-E GT is scheduled for 2021.

Considering its biggest rival, the Tesla Model Y, will start from around £47,000, Ford's Mustang Mach-E is a tasty all-electric proposition.

Let us know what you think on Facebook, Twitter or in the comments section, below: do you think the Mustang Mach-E will outsell the Model Y?