The Hyundai Motor Company has successfully conducted vehicle platooning on a series of trailer trucks on the Yeoju Smart Highway, in South Korea – a first in the company's history. Vehicle platooning is the notion of having one primary vehicle that leads from the front and communicates with vehicles behind it. It's like active cruise control, but for a multitude of vehicles in a chain.

The technology has been around for some time, but interest in it has grown over the past year as vehicle manufacturers have been making significant breakthroughs in autonomous driving technology. Here, platooning reduces air resistance for the vehicles that reside behind the leading one, whereby it can help reduce fuel usage and lower emissions.

Tested on the Yeoju Smart Highway, a 7.7km-long testbed that was created by the Korean government for the development of autonomous driving technology, Hyundai was able to conduct the trial using two trailer-connected Xcient trucks. Whilst these aren't electric vehicles, the technology could well pass down to the rest of Hyundai's fleet. Autonomous driving is mostly prominent in electric vehicles, think Tesla, a company that's pioneering the technology in consumer vehicles.

Still, Hyundai is looking to turn its diesel-led Xcient truck into a more greener vehicle, where it looks to introduce fuel cell technology to its 40-ton truck. The manufacturer is planning on delivering 1,600 of them to Switzerland by 2025.

Hyundai also used the opportunity to test other technologies that play a role in maintaining a safe operating distance on highways. The manufacturer used other vehicles to cut into the formation to see if the system could handle new dangers. Here, the second truck, which follows at a distance of 16.7m, slowed down to give the incoming car more space – extending the gap to 25m. Lane-keeping technology was also used in conjunction with vehicle platooning to simulate fully autonomous driving condition.

For safety reasons, the trucks were set to 60km/h (37mph). Here, if anything did go wrong, the test driver would have had enough time to react and manoeuvre the truck to safety. We wonder, however, if the technology would still work at higher speeds. Undoubtedly, more tests are required. 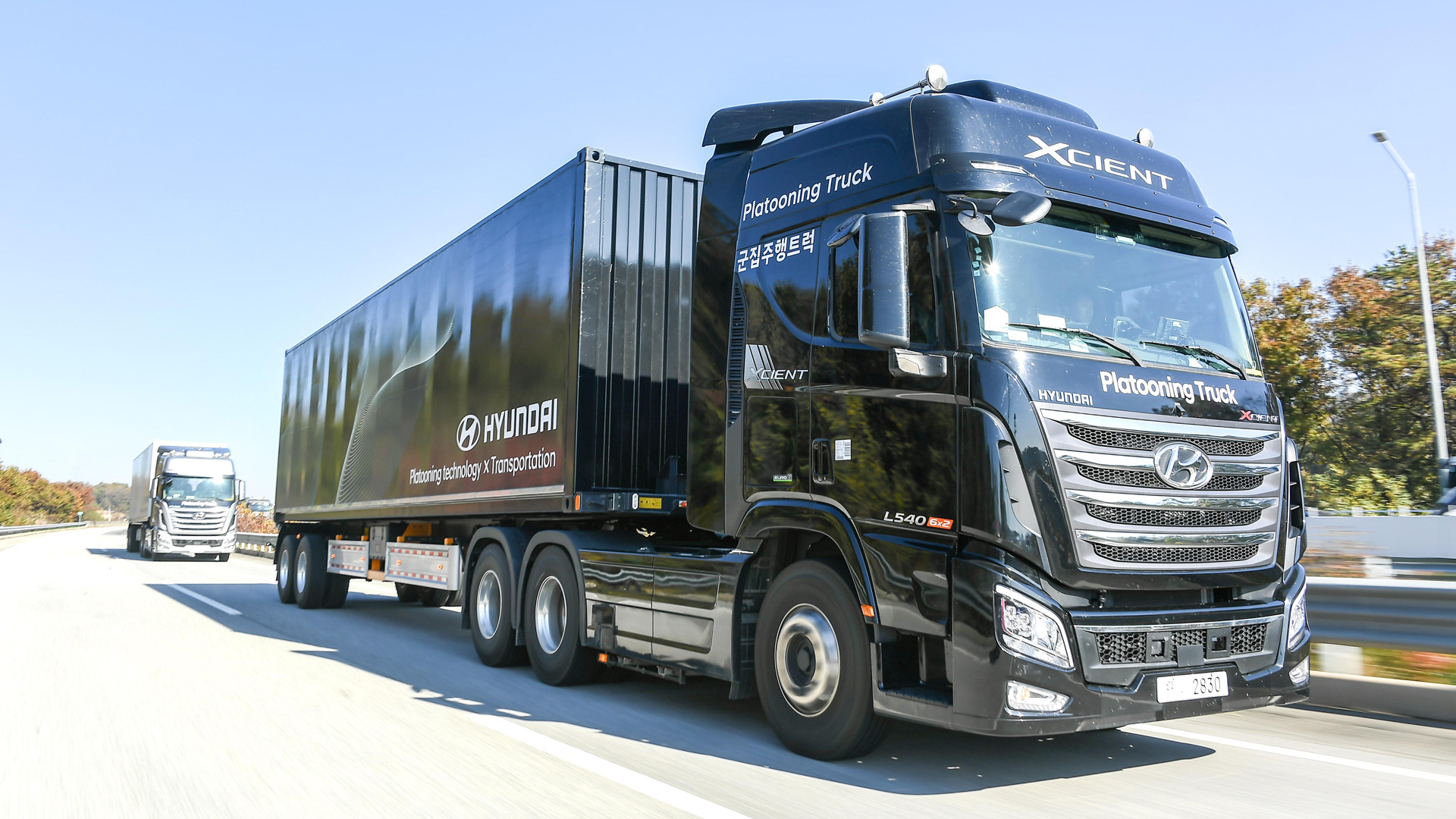 Elsewhere, the manufacturer tested simultaneous emergency braking. Here, the first truck would relay the information to the ones behind it via V2V (Vehicle to Vehicle) communication technology, and in real-time, make the truck behind it purposefully stop; ultimately preventing a pile-up occurring on the motorway.

Better still, thanks to V2V technology, real-time frontal video of the leading truck can be shared with the vehicles behind it, meaning drivers seated in the formation could see the road ahead. This helps solve the problem of not knowing what's in front of a large-sized vehicle.

The advances in autonomous driving technology have been aided by the involvement of the Korean government, namely the Ministry of Land, Infrastructure and Transport (MOLIT), corporations, and of course, academia.

We can't wait to see what autonomous driving will look like in the coming years. Hyundai is certainly taking steps to ensure the technology is developed for its future vehicles. The issue, however, will be the ways government and city planners use the technology – we're still a long way off Level 4 and Level 5 autonomous vehicles hit public roads and are in the possession of consumers.