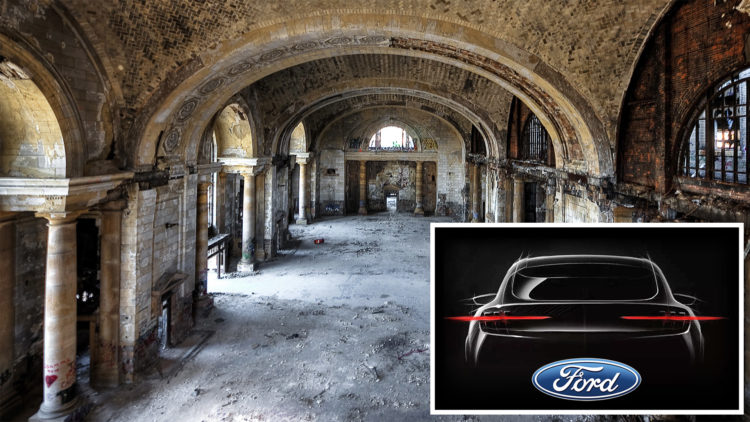 Twenty years ago, with the economy doing well and standards of living rising everywhere, shares in the Ford motor company peaked at $33. Today, they are languishing under $9 a share, with ratings agency Standard and Poors giving Ford a rating of BBB – which is just above ‘junk bond' status. Renault's shares also took a dive last week, down to €49 from an all-time high close to €120. Harsh EU fuel efficiency rules and a faster-than-expected move to electric vehicles have been blamed. So what are the long term consequences likely to be? How will Ford and the other traditional car companies respond to pessimistic analysis of their financials?

For years, photographers from around the world travelled to Michigan Central Station in Detroit (pictured, above), to capture some amazing images. This iconic building – built in 1913 – had long been abandoned, with broken windows and graffiti across most of the walls. The last train rolled through in 1988. This is the location that Ford has chosen as the base from which to launch its phoenix-like transformation into an electric vehicle leader (see insert image).

While the sentiment is laudable and the long-term goal a necessary target for Ford, there will be a lot more out-goings before the car company can turn the corner. The renovation alone could reach close to $500 million – followed by up to $11.5 billion in new vehicle innovation (EV and hybrid) over the next three years.

A lot of Ford's hopes have been pinned to the ‘Mustang-inspired all-electric SUV' that's scheduled for launch mid-November (17th in the States, 18th in Europe). While attractive styling and pricing will play a role, Ford will lead with the message that it's new Mustang EV SUV will have a range up to 370 miles. That would put it over 100 miles ahead of the £60,000 Mercedes EQC.

There's no doubting Ford's commitment. They've recently said, “all-electric vehicles run on battery power alone. Zero fuel. Zero emissions on the road. So, they’re better for the environment and, with government purchase incentives, reduced road tax and no penalties in some low emission zones, they’re good for your wallet too”.

Ford's customer research programme says that ‘90% of drivers believe electric vehicles lack acceleration, competitive top speeds – and that they will struggle in the cold'. All of these assumptions are being challenged, straight out of the gate.

Building a new future won't come cheap. Ford's financial challenges will be made harder by S&P's ‘BBB' rating. At that level, Ford will have to pay much more interest on any loans necessary to construct its electric future.

Renault's alliance with Nissan hasn't proven to be the great East-West combination that Carlos Ghosn, former CEO of Renault, would have hoped before his arrest. Off the announcement of a 20% drop in profits, Renault's shares dived 12%. Nowhere near the 99% dive that Nissan's profits took in the first quarter of the year; and yet, the two companies remain linked at a deep level, with Renault owning close to 43% of Nissan and the French government owning 15% of Renault.

Various solutions have been floated, regarding the long-term financial future of Renault and Nissan, including the ongoing possibility of a merger with Fiat Chrysler (FCA). Given that electric cars are far easier to design and build than petrol and diesel models, presumably, the traditional manufacturers all have far too much space allocated to production and lots more staff than would be necessary by 2030.

Whatever the future holds for these giants of the motor industry, their loss appears to be Tesla's gain. The sooner the majors move the majority of their new models to an EV powertrain, the sooner they can get over the pain of re-tooling, re-skilling, and instead will be able to focus on innovation and a potentially sunnier future.

Financials posted around the end of 2022 will show if Ford has been as successful in resurrecting its own transport fortunes as it plans to be in renovating Detroit's famous transport landmark.