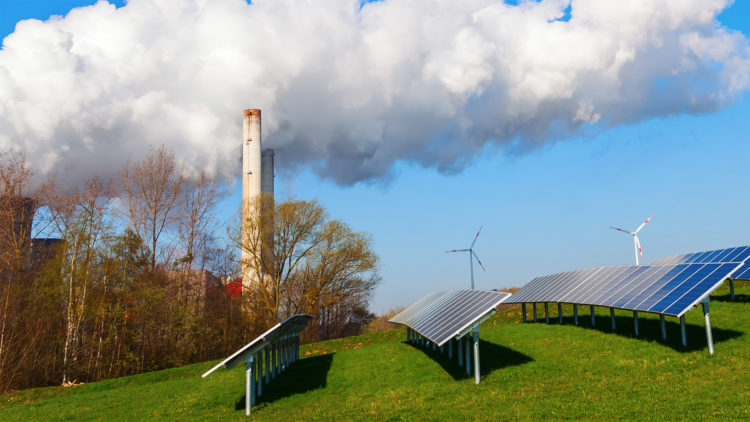 According to a report published by Carbon Brief, energy generated from renewable sources in the UK surpassed that of fossil fuel power plants – a first since records began.

During Q3 2019 (July, August and September), it's estimated that renewables generated a total of 29.5 terawatt-hours (TWh), around 0.4 TWh more than fossil fuels did in the same period. A combination of wind farms, solar panels and biomass plants helped achieve this result.

Plants powered by fossil fuels have been around since 1882, wherein 2010 they accounted for around three-quarters of the UK's total energy output. Since, electricity generation from fossil fuels has halved, whereas renewables have quadrupled.

In the graph below, you'll see in blue the declining output from power stations that are burning coal, oil and gas, and in red the rising energy generation from renewable sources. Demand fluctuates to reflect summer and winter months, where the latter requires more electricity generation to keep homes and businesses warm during chillier months.

The reduction in the use of fossil fuels is also the result of the UK government's deadline to have all of the said plants closed by 2025. It's expected that by March 2020 only four coal plants will remain in operation: the West Burton and Ratcliffe-on-Soar plants in Nottinghamshire, Kilroot power station in Northern Ireland and a further two from the Drax power station in North Yorkshire.

To those working in the industry, this won't come as a surprise as coal plants are rapidly ageing; most were built in the 1960s and 70s, where they're becoming more expensive to run due to inefficiency. And with fewer homes having a gas boiler or gas-operated central heating, there's less demand for gas throughout the country.

It's unlikely that renewables will overtake fossil fuels for the entirety of energy output in 2019, however, it's likely that we'll see it push past this milestone in 2020. Although this uphill trend seems positive, Dr Simon Evans of Carbon Brief explains that “a lack of progress in other parts of the economy means the UK remains far off track against its upcoming legally-binding carbon targets, let alone the recently adopted goal of net-zero greenhouse gas emissions by 2050.”

The big rise in renewable energy, namely from wind, comes from the completion of the Hornsea One project, the world's largest offshore wind farm. It contributes to 1,200 megawatts (MW) of energy per year to the grid. Beatrice, another recently-built offshore wind farm generates 588 MW of power, too.

It's an exciting time to be in the industry, as the UK government among others in the world are making a strong push for renewable energy. The rise in demand of all-electric cars from consumers; the increased focus by car manufacturers; the ever-growing charging network; and electricity generation coming from more cleaner, renewable sources, all contribute towards a greener environment. Let's keep this movement going.

For more information and the full report, head over to Carbon Brief's website.