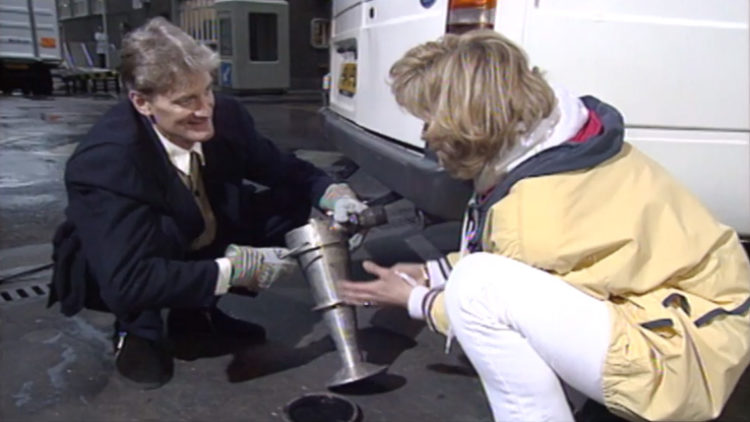 Sir James Dyson, the founder of Dyson, has announced that his company will no longer be focusing on building an electric car. The company that's best known for its vacuum cleaners and household appliances, has been trying to lower car emissions since the 1990s.

Pictured above, James Dyson went onto British national television in 1993 to explain how his ‘cyclonic filter' could help reduce car pollution. When the presenter asked if manufacturers had taken to the idea, Dyson replied: “Well they quite like it, but they're not doing anything about it”, he then went on to say that “we need to pass some laws so that people are forced to fit it”.

Instead of relying on other manufacturers, the British-born manufacturer took things into its own hands and launched its electric vehicle project in 2016. The company had planned to invest £2.5 billion into the development and engineering of an all-electric vehicle, where half those funds would be used to develop better batteries and the rest to create a new car.

With over 500 people working on the project in the UK, the car was set to launch sometime in 2021, however, has now been scrapped altogether. In a statement made on 10 October 2019, James Dyson mentions the project was no longer “commercially viable”.

The news comes after the company failed to find a buyer for the project, and with rising competition and costs of manufacturing, the project would have set the company back a lot of money; with little to no profits in the foreseeable future.

Unlike automotive brands, Dyson doesn't have the scale to manufacture, develop and test electric vehicles. Companies like VW, that's set to launch its own all-electric car at the beginning of next year has a far more sustainable business model – they're already in the car industry; Dyson was attempting to break into it by developing new technologies.

Dyson went on to say: “This is not a product failure, or a failure of the team, for whom this news will be hard to hear and digest. Their achievements have been immense – given the enormity and complexity of the project.” The company will be looking to use the capital it initially set aside for its electric car project to develop better batteries and invest it into products within its current portfolio.

The news will come as a blow to the industry. Dyson is a company that has a primary focus to develop new technologies and reinvent the wheel. With a manufacturer like Dyson now out of the equation, it could lead to other smaller or startup manufacturers ceasing production, too. Ultimately, when there are fewer players in the all-electric field, consumers and indeed the environment will both be negatively affected.